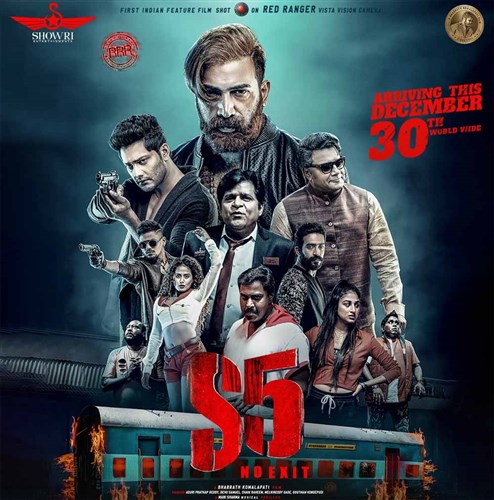 After his hit show “9 Hours” on Disney+ Hotstar, actor Taraka Ratna has come with his latest flick “S5 No Exit” which is a horror thriller and political drama. This film marks the debut of “Aata” dance show winner Sunny. Though the film started shooting two years ago, it release now. The trailer received a very good response. As said by the director himself, the movie is a horror thriller with a political drama element. It also has comedy.

Story:
S5 No Exit is the story of Subbu(Taraka Ratna) the son of Prajaseva Party’s CM(Sai Kumar). His father plans Subbu’s birthday party in coach S5 of a train going from Hyderabad to Visakhapatnam. While Subbu and his friends enjoy the party, Prince and his dance troupe enter the same coach and they immediately spark off a dislike for each other. As this is happening, other members of the coach start to disappear slowly and the doors of the coach don’t open. What happened next forms the plot of the movie.

Performances:
The film boasts of an ensemble cast which includes Taraka Ratna, Sai Kumar, Prince Cecil, Ali, Sunil and many others. Taraka Ratna presented himself in a new avatar. He has been doing variable roles recently and this one stands out. The look in the film is very stylish and his performance is quite commendable. Sai Kumar was his usual self and did very well as a Chief Minister. Prince also performed well. Ali provides a laugh riot while Sunil was entertaining.

Technical Aspects:
Firstly, the cinematography of the film is impressive. DOP Anji of ‘Garuda Vega’ fame kept every frame in an interesting manner. Music by Manisharma is gripping and keeps us on the edge of our seats. Even though Director Bharrath is a debutant, the way he handled the screenplay and narration is impressive. The blend of horror and political drama was executed well. The climax is a fitting end to the film.

Analysis:
S5 No Exit comes with a new story and premise. The horror elements work very well with the music adding to the effect. The train scenes were made nicely and the comedy works out well in many places. Post-interval, the political aspect of the film also blends well. Performances by actors are impressive.

Final Verdict:
‘S5 No exit’ is a very good thriller which marks a good end note for 2023.