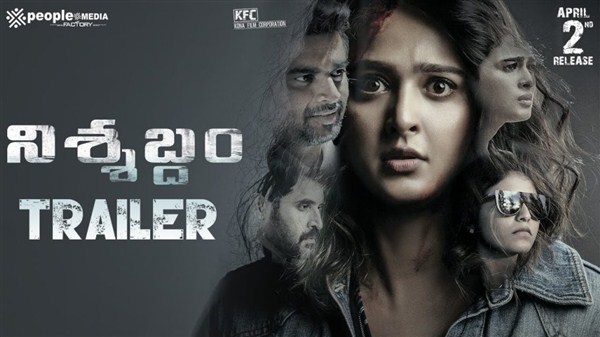 Story : Sakshi (Anushka Shetty ) is a deaf and dumb artist and she is very close to Sonali (Shalini Pandey). Sakshi her fiancé Anthony (Madhavan) go to a haunted villa to celebrate their engagement ,where Josephine wood painting exists. Anthony gets killed and Sakhi gets attacked. What happens when she finds herself embroiled in a police investigation? Who killed Antony? How do police solve the case? To get these answers, one should watch the movie Nishabdham on the screen.

Positives: Anushka and Madhavan steals the show with their incredible performace. Among all Subbaraju, Anjali, Shalini pandey got meaty role and did justice. Whole credit goes to director Hemant Madhukar who had showcased each and everypoint in a picture clear way. The way the screenplay made was awesome. Story- screenplay background score and cinematography was good production values are lavish.

Flipside: few scenes might be choped off.
Overall: Nishabdham is out and out engaging thriller which is must watchable at weekend. Anushka and madhavan as usual gave rock solid performance. Whole credits goes to director itself as Hemant Madhukar detailed each and every logic and one must be able to understand the logics.Production values are lavish besides cinematography is good. Overall a perfect engaging thriller for weekend.