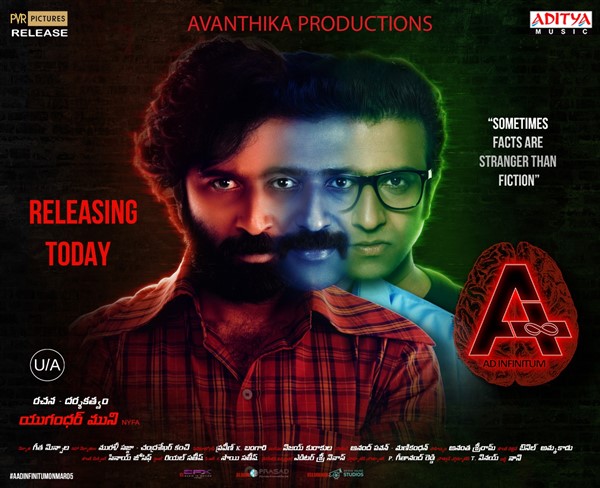 Hero Nithiin Prasanna and Preethi Asrani are playing the lead roles in a suspense thriller titled A. Already Nithiin acted in Tamil films and impressed everyone. With this film, he is set to make a rocking performance in Telugu. Preethi also sizzled in a few films that have come out already. Check out the film’s review here.

Story:
The story spanning a time frame revolves around a married guy who goes in search of knowing his past. He meets with an accident and gets admitted in a hospital. He forgets his past. Nurse Pallavi (Preethi Asrani) takes proper care of him. They fall in love together. What happens then? What is his past? What happens in the end? Forms the story of the movie.

Performances:
Nithiin has played the hero role in the film. He has displayed a versatality in his performance by even playing a negative lead. He played three different roles and impressed everyone as someone who forgets the past. Preethi Asrani’s performance is highlight for the movie. As a house wife and nurse, she has given her best for the movie. Interestingly, her performance has got the spark to catch the attention of everyone. Nithiin Prasanna impressed in the doctor character as well. It is indeed his one man show in the film. The rest of the cast made their presence felt.

Technicalities:
Since the film is a suspense thriller, it is important to have an eye on detailing and technical values. The director worked hard to generate a grand output for the film. The film’s major highlight is the background score, done by Vijay. Praveen’s camera work is brilliant too. Anand Pawan and Manikandan did good job with editing. The film could need some chopping in the second half to raise the pace of the film. However, the film has came out well. The commecial values to this story is blended well. The director has the skill to do more interesting films in the future.

Verdict:
A is a different thriller compared to what we regularly see these days. The film’s trailer was launched by Vijay Setupathi. A huge positive response has been generated for the movie. The director has picked up an interesting point and has impressed everyone big time. We have seen a lot of interesting thrillers but this one is certainly special. Nithiin Prasaanna is extraordinary in the film. The performances and technicalities has taken the film to next level. Those who love thrillers will surely like this film. A must watch movie.

Punch Line: ‘A’ is the best suspense thriller in recent times.