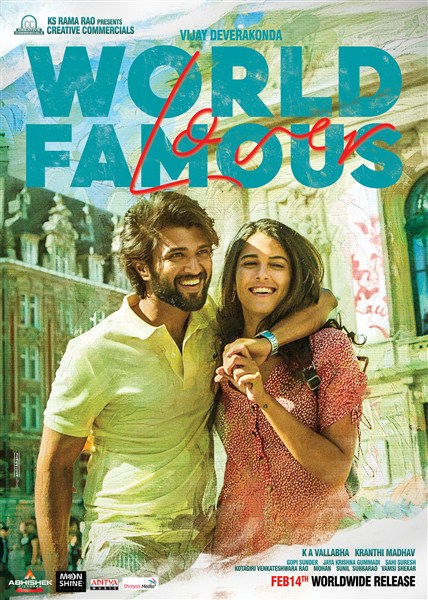 Known for his unique strategies to promote films, happening hero Vijay Devarakonda is a specialist in picking right subjects which will reach to wider audience. Likewise, his next outing World Famous Lover will also appeal to all sections.

Aishwarya Rajesh’s first look was released yesterday to a good response. It was a big surprise to see the actress as Vijay Devarakonda’s wife. Now, a new poster to introduce Izabelle Leite as Iza has been unveiled today.

This poster and the introduction given by Izabelle Leite in French talks about a French connection. His name here is also different from his first poster with Aishwarya Rajesh. Izabelle Leite addresses Vijay Devarakonda as Gautham.

Vijay who looked decent in a clean-shaven look as Seenayya, appears trendy here with urban-styled beard. Izabelle Leite, on the other hand, looks pretty. Going by the poster, they seem to have shared rocking chemistry in the film.

The Kranthi Madhav directorial also has two other heroines Catherine Tresa and Raashi Khanna whose first look posters will be released tomorrow and day after tomorrow respectively.

Gopi Sundar scores music, while Jaya Krishna Gummadi is the cinematographer. World Famous Lover is being bankrolled by K A Vallabha under his banner Creative Commercials and presented by K S Rama Rao.