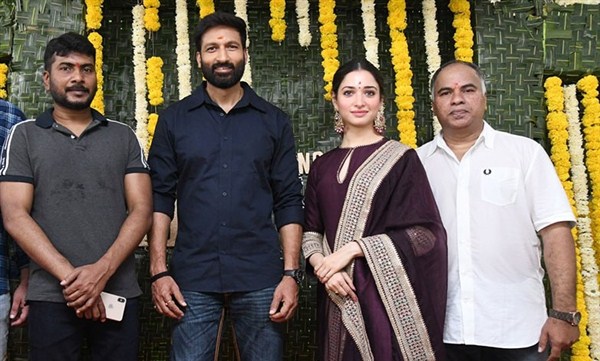 Macho Star Gopichand’s next in Mass Director Sampath Nandi’s direction has kickstarted its regular shoot from December 14th. Srinivasaa Chitturi who has earlier produced Superhit film, ‘U-Turn’ under Srinivasaa Silver Screen banner is producing this biggie as ‘Production No 3’. Milky beauty Tammanah is playing the female lead while Digangana Suryavanshi is playing as another heroine in this prestigious film which will be made on a large scale with high technical values and high budget. Mani Sharma is composing the music while Bhumika and Rao Ramesh are playing other key roles.

On this occasion Producer, Srinivasaa Chitturi said, ” The regular shoot of Gopichand – Sampath Nandi’s film in our banner has started today. We will picturise crucial scenes as a part of this first schedule at a lavish set erected at Aziznagar. This will be the highest budgeted film in Hero Gopichand’s career and will become another prestigious film in our banner. While Tammanah is playing as the heroine opposite Gopichand, Digangana Suryavanshi will be seen as another heroine in this film. After the completion of the first schedule, we will continue filming Rajahmundry and Delhi’s schedules. We are planning to release the film for Summer.