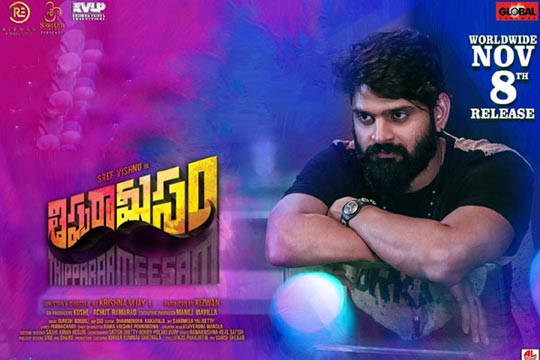 Young hero Sree Vishnu whose previous outing ‘Brochevarevarura’ turned out to be a decent hit at the box office joined hands with director Krishna Vijay and is going to come up with an interesting movie titled as ‘Thippara Meesam’. The title itself has been grabbing the attention of the audience. Nikki Tamboli played the female lead in this movie, which finally got released today on November 8th, 2019. Suresh Bobbili composed tunes for this movie. Here is the review of the film.

Mani (Sree Vishnu) is a social deviant. He gets addicted to all bad habits like drugs in the school itself. Mani’s mother (Rohini) forces him to stay at the Rehab Centre, which makes Mani hate his mother. With his Mani’s anger towards his mother also gets increased. One day, Mani loses 30 lakhs in a cricket betting and he has to repay the amount in 2 months. He receives a cheque for 5 lakhs from his mother and forges the sign for 40 lakhs. But as the cheque bounces due to insufficient funds, Mani sends a legal notice to his mother. What happened to Mani? What happened to his relationship with his mother? Did he succeed in repaying the money? forms the rest of the story.

Sree Vishnu took up a different kind of role in this film but he caught the body language of the character well and impressed with his performance. He breathes life into the character and makes us believe that no one else can pull off that character with such perfection. Be it the dialogue delivery or expressions, Sree Vishnu proved his acting skills with this flick. He has done exceptionally well in emotional episodes as well. Nikki Tamboli is too good in her role. Her chemistry and the love-hate relationship with Sree Vishnu is also a delight to watch. Rohini went under the skin of the character and delivered her best. Especially in the emotional scenes, Rohini’s performance added more strength to the film. Ravi Prakash does well and Varma Ravi has done a good job. Achyut Ramarao showcased maturity in terms of his performance, and Naveen Neni acted naturally. Banerjee also marked his presence felt.

Director Krishna Vijay has prepared and interesting storyline for this movie. The director has not only focused on the mass elements in the film but also gave equal importance to the storyline of the movie. His screenplay and narration are also terrific. The way the director has narrated the story is worth appreciating. Production values by Rizwan are very rich. Music by Suresh Bobbili is top-notch. We can say that the background score given by him is one of the major driving factors of this film. Cinematographer Sid has produced some beautiful visuals for the film. His camera angles and visuals also added more strength for the film. Editing by Dharmendra Kakarala is decent.

The movie starts off on an interesting note, and the entire first half of the film is all about the character introductions. Especially, the hero character is designed in an interesting way and will create an impact on the audience. The entire movie revolves around him and his attitude. Sree Vishnu’s performance show became a plus point for this film. The interval block is superb. The second half is also really good, and the director has tried to succeed in making the story as crisp as possible. The climax and pre-climax also got handled well. Performances, narration, story line, and BGM will be the plus points of this film. However, some of the draggy scenes in the second half and unnecessary scenes will be the minus points. Overall, ‘Thippara Meesam’ is definitely a worth watching movie.