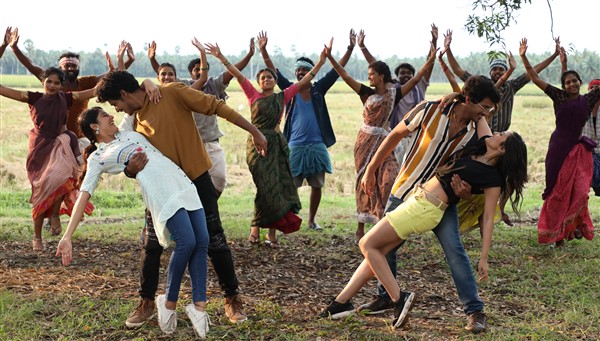 The animated version of ‘Ko Ko Ko Kothi Kommachi’, a uniquely conceptualised theme song from the youthful entertainer Kothi Kommachi, directed by National award-winning filmmaker Satish Vegesna, was released by leading producer Dil Raju recently. Shot in 2D animation, the theme song has been the buzzword among one and all across social media upon its release. Produced by MLV Sathyanarayana under Lakshya Productions, Kothi Kommachi stars Meghamsh Srihari, Sameer Vegesna, Riddhi Kumar and Megha Chowdhury in pivotal roles.

Director Satish Vegesna adds, “I’m grateful to producer Dil Raju for releasing the theme song of our film. The song was initially conceptualised for an interesting situation in the film but we felt it would be unique to release an animated version of the same. While the lead actors groove to the song in the feature film, we’ve made a bunch of monkeys come up with catchy moves in this animated version, going by our title. Sri Mani’s lyrics and Anup Rubens’ catchy music add lustre to this number that’s sure to catch the attention of children. Kothi Kommachi is a clean youthful entertainer, perfect for family viewing,”.

“Thanks to the theme song, we’ve kickstarted the promotions with a bang. We’re confident that the song would be a special attraction for audiences in the film as well. Composer Anup Rubens and lyricist Sri Mani deserve all the credit in pulling this off. The film is currently undergoing post-production. We’ll announce a release date once the second wave of COVID-19 subsides and the situation stabilises,” the producer MLV Sathyanarayana shared.

Anup Rubens, expressing his gratitude to team Kothi Kommachi, stated “This is a film that offers wonderful scope for music. The director Satish Vegesna not only has a great eye for visuals but also a good ear for music and has given me many unique situations to compose in the film. The Kothi Kommachi album comprises songs across various genres. I hope music lovers will appreciate our efforts with the theme song.”