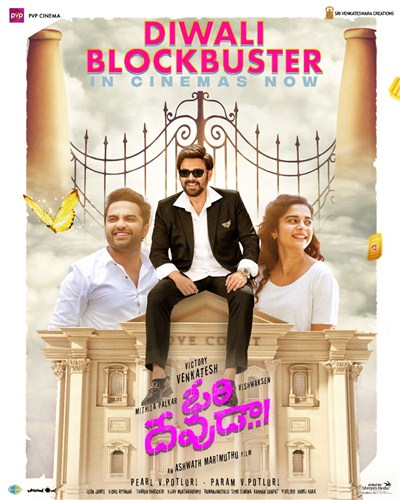 Vishwaksen and Mithila Palkar played the lead roles in the latest Telugu film Ori Devuda. The film is creating a special interest as it is the remake of the Tamil hit Oh My Kadavule. The film was released today. Check out the review here.

Story:
Arjun (Vishwaksen) and Anu (Mithila Palkar) are good friends from childhood. Both get married but at the same time, things don’t go well between the two. In this point, Arjun develops feelings for Meera (Asha Bhat). The relationship of Arjun and Anu gets into divorce. What happens then? forms the story.

Performances:
It’s a simple love story, but the director brilliantly gives it that fantastic touch. The character of the god Venkatesh added novelty to the process and aroused interest. Venkatesh is charming as always and shines in his cameo role. Her body language and looks are perfect. He is one of the actors who can make the magic and the magic worked for this film as well. We’ve seen Vishvak Sen play a gentle role in films before. With Ori Devuda, Vishwak proved once again that he too can get into other roles like what he played in the movie. He is quite comfortable in emotional scenes and plays well what the film asks for. This actor shows a lot of variety in his roles. He improved a lot. Mithila Palkar gives a good performance as a happy girl. His chemistry with Vishvak Sen is good. Asha Bhatt also got the lead role in the film. Her characters are well written and she gets cute dance numbers to show off her dancing skills. On the whole, the casting department is good. All the actors made their presence felt

Technical Aspects:
Technically, the film is impressive. It has everything that one expects from a proper entertainer. The VFX work at several points in the film is uneven and looks odd on the big screen. This rom-com may not be suitable for all sections of the audience. This film is also not exaggerating. Some aspects should have been better to make it more magical. But still, the executive producer Vamsi Kaka made sure the film got everything in the right place. From executing the script to promoting it by the end of the release, he has done everything perfect. Leon James’ music is a joy to listen to. The songs Gundellona and Avunanava stand out and add impact to the drama. Vidhu Ayyana’s cinematography is fair. The production value is decent.

Verdict:
The film’s first half is good in parts while the second half of the film offers an enjoyable journey with some dramatic moments. The story progresses at a good pace in this section. The funny parts are fair enough. The subtleness in the original script has been maintained perfectly in the film. This film takes some time to get into the actual plot. Most of the story doesn’t happen until the second half, and the first hour doesn’t offer much. The pace was very slow in the first half. If the procedures were more different, the overall impact could be greater. The film fell behind at some point and the editing team had to shorten the film to make things engaging and workable for everyone. Ori Devuda is a decent rom-com that offers some good drama in its second half. All the main actors do a great job and the songs also help this film. Vamsi Kaka done well with his executive production. On the whole, the film has everything in the right place, perfectly.

Minus Points:
some scenes