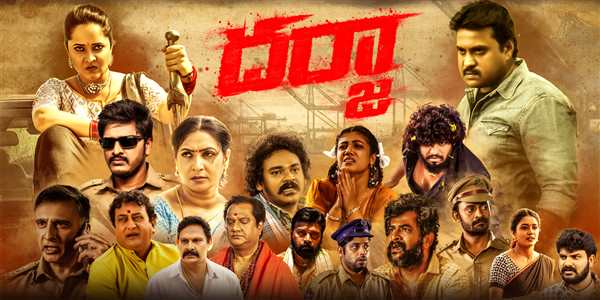 Story:
Kanchu Kanakam (Anasuya Bharadwaj) is a brand ambassador for all the crimes happening in Vaivaka. ACP Paidipati Siva Sankar (Sunil) tries to spoil Kanakam`s plans and also investigates Ganesh`s murder. Why does Kanchu Kanakam gain that name? What is her motive? What did Siva Shankar do to put a check to Kanakam? What happens in the end? Forms the story of the film.

Performances:
It’s reasonable why Sunil and Anasuya are given amazing presentation successions in Darja in light of the fact that they did well in the film Pushpa. Both the actors have given their best for the film. From appearance to the body language to the dialogue delivery, they have done everything that they could. The chemistry between the pair is too good. The scenes in their combination have come out well. The presence of Sanjay Swaroop, Aamani, Shafi and Shakalaka Shankar helped the film. They did make their presence felt.

Technical Aspects:
The film is good on the technical front. The makers worked hard in writing. The execution is perfect. The director made sure to give equal importance to all the characters. The camera work is impressive. The drama and action elements are equal in proportion. The background score has perfectly elevated the film. The editing is good. The production values are grand.

Verdict:
The presence of two well known faces (like Sunil and Anasuya Bharadwaj) is publicized as the USP of a film and it has worked out big time. It’s a film where its purported lead entertainers star in expanded appearances and drives the story forward. Darja is a film where the group has a influence over the story. The intriguing camera points and ensembles for Anasuya are simply good. On the whole, Darja has everything that will be in a commercial film to impress the audiences. Watch it.