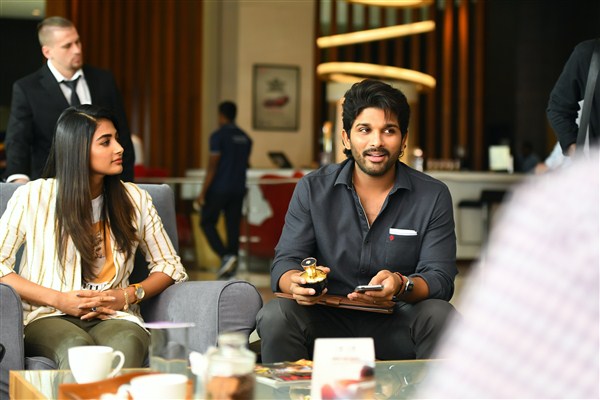 The makers of Allu Arjun’s Ala Vaikunthapurramuloo have released the fourth song from the audio album titled ‘Butta Bomma’ today, December 24th. This song is a romantic melody crooned by Armaan Malik. Thaman has matched the expectations by composing a soulful melody. ‘Butta Bomma’ song has already garnered a good response from all quarters.

The audio album of Ala Vaikunthapurramuloo is a raging hit already. The first song from the album, Samajavaragamana had already gained 100 million views on YouTube and the second one, Ramuloo Ramulaa achieved the same feat in a much lesser time. Ramuloo Ramuloo holds the record for being the fastest Telugu song to reach 100 million views on YouTube.

Ala Vaikunthapurramuloo is the only South Indian film which has two songs in the ‘100 million views’ club. This mighty feat was achieved by the stylish star Allu Arjun-starrer. Samajavaragamana and Ramuloo Ramulaa have already worked wonders for Ala Vaikunthapurramuloo and Butta Bomma is expected to continue the trend further.

Produced jointly by Geetha Arts and Haarika & Hassine Creations, this movie, which will hit the screens on 12th January, 2020, has been riding high on expectations.

Jagan off to Delhi to meet Modi