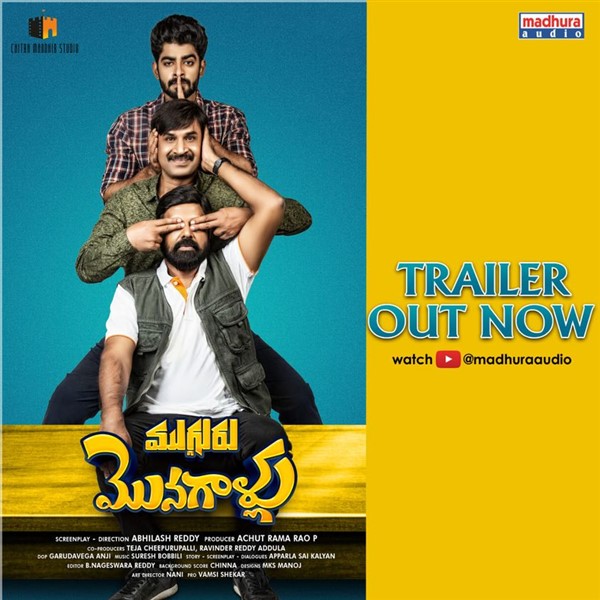 Popular comedian Srinivas Reddy needs no special introduction. Besides doing comedy roles, he is quite often appeared as protagonist. Impressed with his hilarious performance in films like Geethanjali and Jayammu Nischayammu Raa, Srinivas Reddy is coming up with an out and out entertainer Mugguru Monagallu.

Abhilash Reddy is directing, while Achuth Rama Rao is producing the film under the banner of Chitra Mandhir Studio. The film stars Srinivas Reddy in the lead role, while Deekshith Shetty (Kannada hit movie ‘Dia’ fame) and Vennela Ramarao appear in prominent roles.

Mugguru Monagallu Theatrical trailer has been unveiled. The trailer begins introducing the three main leads- Srinivas Reddy as a deaf, Deekshith Shetty as a dumb and Vennela Ramarao as a blind. Among the three, Srinivas Reddy has taken the responsibility to offer comic relief.

Things go smooth, until back-to-back murders happen in Hyderabad and the police hire the three to help them in cracking the case. Well-known journalist TNR who passed away recently can also be seen in the trailer which is engaging all through.

Garudavega Anji has handled the cinematography, while Suresh Bobbili is the music director and Chinna provided the background score. B. Nageswara Reddy is the editor and Nani is the art director.

The shooting of Mugguru Monagallu is wrapped up and the post-production works are underway.