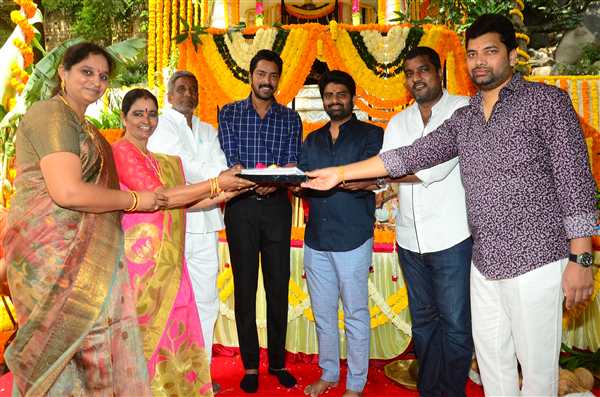 Hero Allari Naresh and director Vijay Kanakamedala delivered a commercial hit together in their first collaboration with Naandhi which won critical accolades. Particularly, Allari Naresh treats it as a beginning of a new innings. The duo has joined forces for their second film together. The movie was announced officially recently.

Ugram had a grand launch this morning in Ramanaidu Studios. Dil Raju sounded the clapboard for the muhurtham shot while Producer Damodar Prasad switched on the camera. Star director Anil Ravipudi directed the first shot while Director’s parents – Ramakoteswara Rao Kanakamedala and Lokeswari Kanakamedala handed over the script.

Besides revealing the title, the makers have also unveiled first look poster.

A powerful title Ugram is finalized for this movie tipped to be a new age action thriller. The first look poster sees Allari Naresh shouting in rage, as he’s stabbed in the back and there are injuries all over body. The poster justifies the title of the movie Ugram (Fierce). Remarkably, the title is designed with red colour.

Sahu Garapati and Harish Peddi of Shine Screens that made several intriguing projects such as Krishnarjuna Yuddham, Majili, Gaali Sampath and Tuck Jagadish will be producing the movie as Production No 5 in the banner.

Vijay Kanakamedala who proved his mettle with his maiden directorial venture has prepared an intense story for his second movie to present Allari Naresh in a different role.

The film start rolling very soon. The movie will star some noted actors in crucial role. Coming to technical department, Toom Venkat has written the story, whereas Abburi Ravi has penned the dialogues. Sid will take care of the cinematography, while Sricharan Pakala will provide the music. Chota K Prasad will edit the movie, wherein Brahma Kadali is the production designer.

The film’s other cast and crew will be revealed soon. The Regular shooting will begin next month.