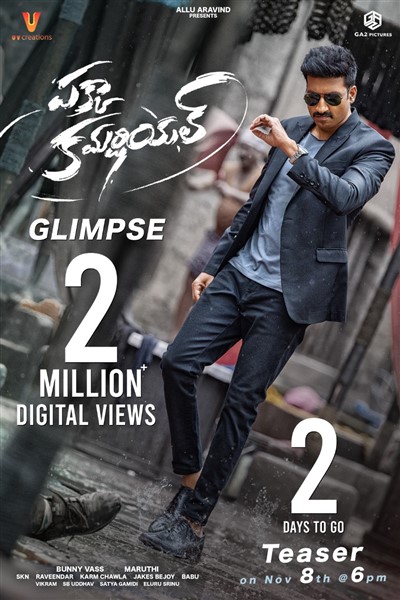 Pakka Commercial, featuring Macho Star Gopichand and Raashi Khanna in the lead roles is being helmed by Maruthi. Ace producer Allu Aravind is presenting the film while GA2 Pictures and UV Creations are jointly producing it. Maruthi and Bunny Vas are collaborating for the film.

The glimpse video of Pakka Commercial was unveiled a couple of days ago and it has garnered a very positive response. With close to 2 million views, the glimpse has garnered a rousing reception and it has set the stage for the teaser which will be put on the 8th of November.

Pakka Commercial is billed to be a proper action comedy entertainer with all the necessary commercial ingredients. Successful banners GA2 Pictures and UV Creations are jointly bankrolling the Gopichand starrer and it is riding high on buzz already.

The teaser of Pakka Commercial will be out tomorrow and it is expected to catapult the buzz surrounding the film. Jakes Bejoy is composing the music for the film and Karm Chawla is handling cinematography. Star production designer Ravinder is handling art direction.

The film has Gopichand, Raashi Khanna, Rao Ramesh, Sapthagiri and others in important roles.