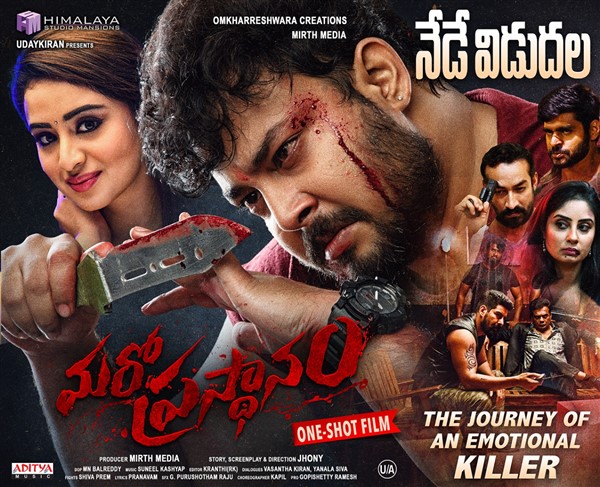 Maro Prasthanam is the new Telugu movie in the theatres. The film unit promoted the movie as a one-shot film. Tanish played the lead role while Muskan Sethi played the female lead in the movie. Himalaya Studio Mansions is producing the film and Uday Kiran is the presenter. Johnny is the film’s director. The film is the story of an emotional killer. Check out the film’s review.

Story:
Shiva, a reckless criminal and trusted lieutenant for the dreaded and brash gangster Rane, an inhuman gangster who could kill anyone and everyone without any inhibitions. But, an unforeseen incident forces Shiva to do a sting operation to expose the gang`s dark secrets. What changed him? How did things flow after that? What happened in the end? Forms the film’s story.

Performances:
Kabir Duhan Singh played Rane in the film and his performance is subtle. He did his best. Muskan Sethi did the role of Yuktha and she is impressive by adding the glamour touch to the movie. Her glam treats in the songs are good. Archana Singh as Nainy is good too. All the other actors have given their best.

Technical Aspects:
The film’s cinematography and music elevate the film perfectly. MN Bala’s DOP work is a major attraction for the film. Sunil Kashyap’s music is a big plus. The production values are grand. The makers should have added a little more entertainment to the film.

Review:
Tanish is a talented actor in the film industry who played a lover boy and the guy next door. But, this film is a different one in his career and he has not done an emotional killer’s character in the movie. Coming to the film’s direction, it is very hard and not possible practically to do a one-shot film. Every scene should go in a sequence and it should be okayed in a single take. Director Jhonny is successful in doing that. From the start to the end, the scenes will be in a flow. There is no deviation. The tragedy in the hero’s character is good and the climax is intense. The audiences will be intrigued by the story. However, the film is different from routine films and the audiences will be impressed certainly.