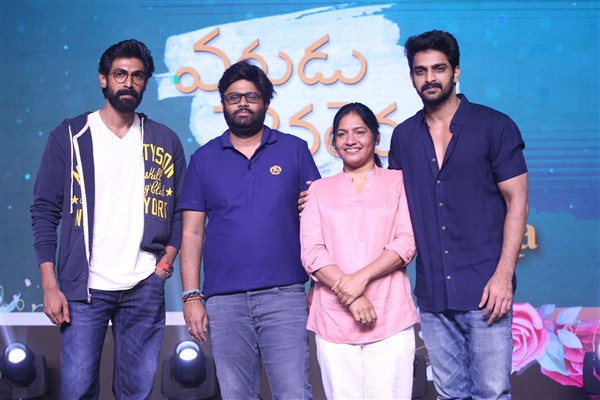 Successful production house Sithara Entertainments is producing Naga Shaurya and Ritu Varma-starrer Varudu Kavalenu. The film marks the directorial debut of Lakshmi Sowjanya and is all set for grand theatrical release on 29th October, 2021. The trailer of the film was unveiled last night in Hyderabad in a grand event which had the attendance of Rana Daggubati. The event was fun-filled and thoroughly entertaining with Naga Shaurya, director Lakshmi Sowjanya and producer Naga Vamsi interacting with the social influencers and answering their funny questions.

Speaking at the event, Rana Daggubati said, “Naga Shaurya is a symbol for good guy. The proverb that comes to one’s mind about Shaurya is ‘Ramu is a good boy’. ‘Varudu Kavalenu’ is a great title and it is apt for Shaurya. Even if one doesn’t reveal the hero’s name, looking at the title we can expect that Naga Shaurya is the hero of the film. Trailer is interesting and promising. Theatres are back. Movies are back. Naga Shaurya is also back with ‘Varudu Kavalenu’. I wish all the best for the entire team. Today, I didn’t come here as a guest. I came for my ‘Bheemla Nayak’ producer Naga Vamsi. I came from straight from the shooting location. I’m sure he will score success with ‘Varudu Kavalenu’ too.”

Talking at the trailer launch, Naga Shaurya said, “During Chalo success party, director Sowjanya Akka came to me and asked me whether I would do a film if I like her story. She had told me the storyline of ‘Varudu Kavelnu’ and I was mighty impressed. After hearing the whole story, I decided that the movie is going to be a big hit. On paper itself, movie is a hit. I’m sure the movie will be big hit on big screens as well. Initially I had thought it was a small movie. But with the addition of a prestigious banner like Sithara Entertainments, the film has become bigger. Producers Chinna Babu Garu and Naga Vamsi Garu are very passionate. They understand the cinema well. They don’t confine a budget to a film based on the hero. They provide budget to the film based on its story and the scale required for the story. Chinna Babu Garu is a true maker. He knows best what all a film requires. ‘Varudu Kavalenu’ caters to all sections of audiences. The film is well balanced such that both family audiences and youth audiences would enjoy thoroughly. The film has really shaped up well. Final output is very good and we’re all quite confident of the film’s success. All the characters in the film really look fresh. Thanks to Ganesh Ravuri’s dialogues which are appealing. The credit for showing me handsome on screen goes to our Cinematographer Vamsi Pachipulusu. His camera work is so nice such that I fell in love with myself after seeing me on screen. Music composer Vishal Chandrasekhar has delivered good tunes. Director Sowjanya Akka has made it so easy and comfortable for me. She has loved the film a lot. Finally, her dreams are turning into real with this movie. Ritu Varma has acted so well. She couldn’t make it to the today’s event as she is busy shooting for another movie. I’m really proud to choose the story of ‘Varudu Kavalenu’ and being part of the film. Thanks to Rana Daggubati Anna for coming all the way and releasing our film’s trailer.”

Responding to some funny questions posed by onlookers and social influencers who attended the trailer launch event, Naga Shaurya said, “I’m very cool in real-life. I’m okay even if my future wife is dominating. At the same time, I won’t adjust in all the matters. I know very well when to reverse. I have reduced 16 kilos of my weight from my previous film. This is the change and uniqueness you can see in me on screen in ‘Varudu Kavalenu’. It is a classic film where family audiences can enjoy it to the core.”

Speaking after the trailer launch, Producer Naga Vamsi said, “Family entertainments have always been top of our priority. We at Sithara Entertainments were fortunate to taste successes with this genre. ‘Varudu Kavalenu’ is a family entertainment with commercial touch. It will appeal to family audiences as well as youth audiences. There is a suspense element in the second half of the film which will stand out. Youth will connect to that suspense element.”

Director Lakshmi Sowjanya thanked Rana Daggubati for gracing the event and launching the film’s trailer. Dialogue writer Ganesh Ravuri said Bhumi and Akash are well-designed characters who are perfect match. He said that the characters are so pleasant to watch on screen. He said the film has fun, emotions and good music in right proportions. “After listening to the story, hero Naga Shaurya Garu said the movie will be a blockbuster. He is right. The outside talk about the film is also the same. Ritu Varma has never played such character. She is perfect for Bhumi’s character. Nadiya’s role is very crucial in the film. I thank my producers for giving me this opportunity to pen dialogues in the film,” said dialogue writer Ganesh Ravuri.

Song writer Rambabu Gosala, who penned the song ‘Kola Kalle Ila’, said he has penned good lyrics for the song. He said music director Vishal Chandrasekhar has done magic with music. He said Sid Sriram has sung the song nicely. Rambabu added that lead actors Naga Shaurya and Ritu Varma are looking glamorous in this song. He said Sithara Entertainments is encouraging him and thanked them for their support.

Comedian Sapthagiri said, “Those who missed my comedy will get a feast with my character in ‘Varudu Kavalenu’. Especially, second-half will have out-and-out entertainment. The word ‘lag’ will play significant role in the film which everyone will enjoy on screen. My character is a tailor-made one and the director, producers wanted me to play it. I thank them.”

Music composer Vishal Chandrasekhar shared, “Songs in ‘Varudu Kavalenu’ have come out really well. Singers and musicians have given their best. The two songs composed by Thaman are so nice. I’m glad to be part of this film.”