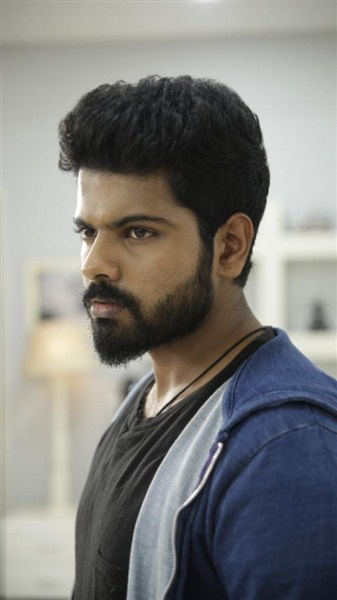 The makers of the New age movie Mathu Vadhalara have unveiled an interesting first look of the movie. It is very unconventional and appears to highlight lot of elements and the clues given in the poster indicate that the movie falls into the genre of Suspense thriller.

Sri Simha younger son of M.M. Keeravaani is being launched as the lead actor. Sri Simha has earlier acted as a child artist in Yama Donga. The makers have gone in for a bundle of new talent and are introducing Rithesh Rana as Director, Kaala Bhairava as Music Director, Suresh Sarangam as DOP, Shankar Uyyala as Stunt co-ordinator. Other than Sri Simha in the main lead, two more debutants Naresh Agastya and Athulya Chandra will be seen in important roles.

According to Chiranjeevi (Cherry) one of the producers of the movie, “Mathu Vadhalara is a ‘whodunnit’ thriller laced with lot of humour. The movie has been very well conceived by the debutant director Ritesh Rana. Since the content is very good with interesting plotline, we decided to encourage new talent and went in for all newcomers. Cherry is presently the CEO of Mythri Movie Makers and has earlier produced Yama Donga with Jr. NTR directed by S.S. Rajamouli and Okkadunadu with Gopichand directed by Chandrasekhar Yeleti.

The teaser of the movie will be released shortly and the movie is presently in post production stage.

Mythri Movie Makers and Clap Entertainment together are producing this movie.

‘Arrtham’ is the most special film in my career:Shraddha Das at...