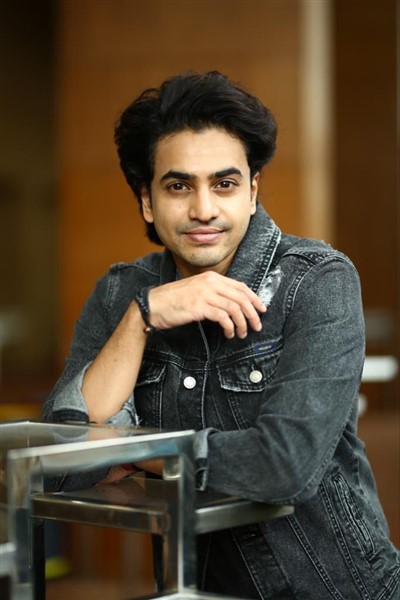 Ashok Galla, the grandson of superstar Krishna, the nephew of Mahesh Babu, and the son of Guntur MP Galla Jayadev, is making his film debut with ‘Hero’. Nidhhi Agerwal is the heroine. The film directed by Sriram Aditya and produced by Galla Padmavati under the banner of Amar Raja Media and Entertainment is set to release on January 15 as a Sankranthi special. Ahead of the release, Ashok Galla spoke to the media.

Director Sriram Aditya informed me that that we are making a commercial film. Chiranjeevi’s films are given as references. I did what the director said on the set. I only followed his instructions and did what he wanted. I did not think more than that.

About the title ‘Hero‘:

I cannot say much about the story right now but there is a justification for the title of this movie in the twist itself. When it will be released, you will say that Hero is a perfect title for the film.

I did not choose Sriram Aditya as the director. We both chose each other. We wanted to make a movie together. It was my good fortune that he chose me as his hero. We connected to each other instantly and enquired me about the kind of films I like. We discussed for about six hours and finally decided to make a movie together. His writing, editing of movies and taking are completely different. I loved the story. I thought he would take care of everything.

Continuing the Legacy of Superstar Krishna and Mahesh Babu:

I didn’t think much about the future. I only saw that it was my debut movie. To continue the legacy of my Grandfather Krishna and Mahesh Babu, I took training in dance and action. I like acting normally though. I am not a natural dancer. I do not like going to the gym. But I learned all this just for the sake of my legacy. I have been doing Theatre Arts since I was a kid. I have a film degree in college. I acted in my grandfather’s film when I was seven or eight. I also acted in the movie Nani. While attending theatre classes in Singapore, I concluded to enter movies after seeing the response there. The final copy of the movie has not arrived yet. When it arrives, my grandfather and Mahesh Babu will watch the film.

About Cowboy Getup in the film:

When I was told about the cowboy getup, I told my director that I don’t know horse riding. He said it would be nice to ride a horse. So, I learned horse riding. That seemed challenging. I always loved Batman since I was a child. There is a small sequence about Joker in the movie. But I did not expect such a response.

I was telling Mahesh Babu for a long time that I am interested in acting. But when I was taking training, he took me seriously. He did not give any tips but only told me how to behave in the industry and how to be brave. Daring and dashing is very apt for Krishna garu. I learned the same from him. Not many know that Mahesh Babu has sense of humour, talent and intelligence.

I want to do all kinds of movies. I will do a film, even if I get connected to the director, or connect to the story or the character. I like films like Tom Cruise’s Mission Impossible. I’m listening to different stories. But nothing has been finalized yet. Hero will offer the entertainment and enjoyment for this Sankranthi. I request everyone to watch the movie in theatres on January 15th.