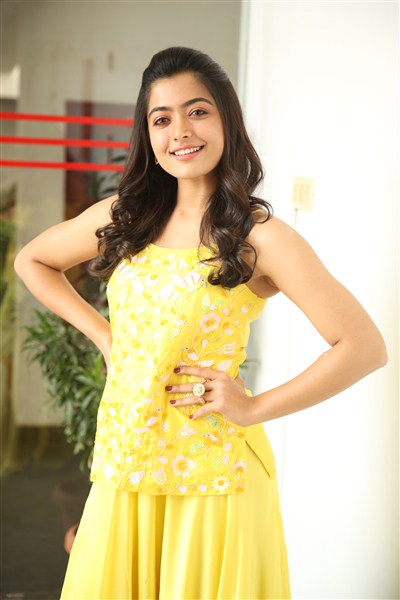 Rashmika Mandanna is one of the talented heroines in the movie industry. The actress has been working hard from day one in the films. She made her debut with the film Chalo and she is now coming up with the film Bheeshma. Her last film in Telugu is Sarileru Neekevvaru that released last month and it has Mahesh Babu playing the lead. The film became a big hit and the film unit is extremely happy with the same. Rashmika too entered the next league of heroines. Rashmika is currently in Hyderabad for the promotions of Bheeshma. She interacted with the media today and revealed a lot of exciting things about the film.

Are you single?
Yes, I am single and the Single Forever tag of the movie suits me well. I and director Venky sat together to discuss what we put the tag for ourselves, on a funny note.

Did you see the film?
No. I did not watch the film yet. When I dubbed for the film, I saw my portions. I am excited about the film and I am also enjoying the promotions of the movie.

Tell us about your role in Bheeshma.
The role in the film provides a lot of entertainment. I do not judge my film but I did Chaitra’s character which is very nice. I work in the Bheeshma organics company. I can tell only that much. The film entertains a lot and it has got all the elements.

How is it working with Anant Nag?
He is like a father figure. We worked four to five days. We spoke Kannada a lot on the sets. He liked my acting and spoke about my work. I enjoyed working with him.

When are you joining Allu Arjun’s film?
I am going to join the film’s shoot in March. You will see a new Rashmika in the movie.