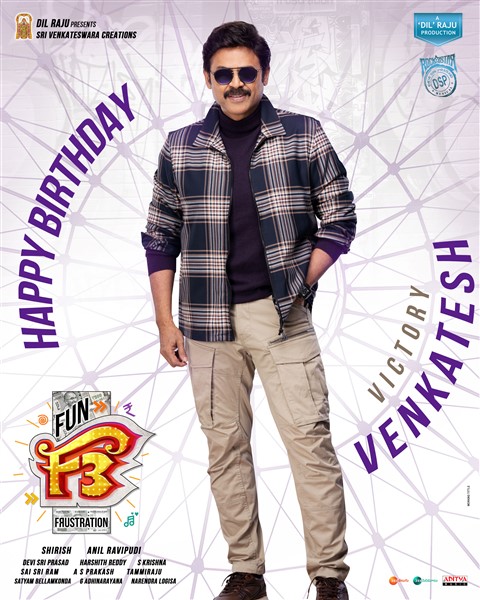 On the occasion of Venkatesh’s birthday, the makers today unveiled birthday glimpse and a brand-new poster. Venkatesh appears relaxing on a bed in front of Charminar with people in different costumes ready to offer him all the survives. Venkatesh appears like a Charminar Nawab in the glimpse, while Rockstar Devi Sri Prasad gives a pleasing background score for it. Coming to the poster, Venkatesh looks uber cool in trendy outfit.

The presence of Nata Kireeti Rajendra Prasad, Sunil and others promise additional entertainment. Tamannaah Bhatia and Mehreen Pirzada play fun and glamorous roles in the movie and Sonal Chauhan is the latest addition. Sonal is roped in as third female lead and she adds more glamor to the film. With so much buzz surrounding the project which is sequel to the double blockbuster F2, movie buffs are waiting eagerly for the release of F3.

The makers hope to deliver much bigger hit, as the film is carrying extreme positive buzz in film and trade circles and there is huge anticipation from commoners as well. A lengthy schedule of the film is happening in Hyderabad and almost entire cast is taking part in it. The film also boasts a stellar cast.

Rockstar Devi Sri Prasad who provided chartbuster album for F2 is readying a superhit album for F3. Sai Sriram cranks the camera, while Tammiraju is the editor. Harshith Reddy is the co-producer.