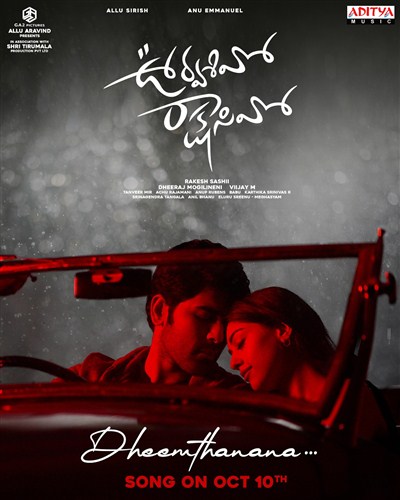 Talented actor Allu Sirish is all set to impress the audience yet again with his upcoming film, titled Urvashivo Raksashivo. Actress Anu Emmanuel will be seen playing the female lead, opposite Sirish, in this romantic comedy. Filmmaker Rakesh Sashii has helmed this project. The recently released teaser has been received well by netizens.

One of the major highlights of the teaser is the magical chemistry between Sirish and Anu. Amping up the promotions today makers announced that the first single “Dheemthanana” is releasing on October 10.

The makers released a romantic poster announcing the news. The makers bringing this endearing tune composed by Achu Rajamani with enchanting visuals. Now everyone is eagerly waiting to hear the first single from the album. More details will be announced soon.

The makers of the film are planning to release the film on November 4. Renowned Producer Allu Aravind presenting the film while Dheeraj Mogilineni producing it. GA 2 pictures bankrolled the film in association with Shri Tirumala Production Private Ltd banner.

Achu Rajamani composed the music. Tanveer handling the cinematography while editing is done by Karthika Srinivas.