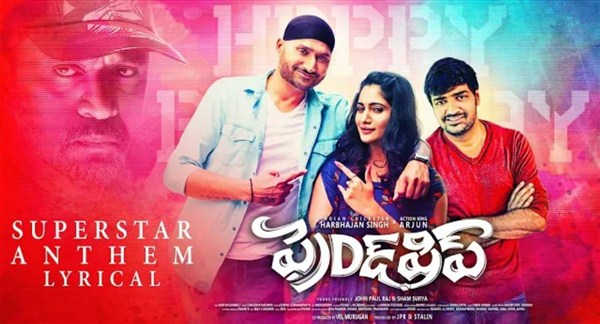 ‘Friendship’ film unit has given a perfect tribute to Superstar Rajinikanth with The Energetic ‘Superstar Anthem’ which goes with lyrics, ‘ Naa Dehamanthaa Superstar, Naa Praanamanthaa Superstar, Naa Oopiranthaa Superstar, Gonthetthi Paadey Superstar’. Popular Indian Cricketer Harbhajan Singh with his magic spin bowling has won numerous matches for India is now coming as a Hero with this film. The First Look Motion Poster which was recently released has garnered superb response throughout the country. Now the first single from the film, ‘Superstar Rajini Anthem’ is released by Raghava Lawrence who himself is a big fan of Superstar Rajinikanth. Raghava Lawrence said, ” I am very happy to release Thalaiva tribute song ‘Superstar Anthem’. Song is too good. All the best to Harbhajan Singh garu and the entire team.”

Music Director DM Udhay Kumar has composed a catchy tune for ‘Superstar Anthem’. Rajasri Sudhakar penned the lyrics and Hema Chandra has sung the song making sure the song to strike a chord with the masses. The song is recieving superb response from the listeners in all the four languages.

Bigg Boss 3 Tamil fame Losliya Mariyanesan is playing as heroine. Action King Arjun is playing a crucial character in the film and Actor Sathish will be seen in another important role. This film is Directed by John Paul Raj and Sham Surya while JPR & Stalin are Producing it under Seantoa Studio and Cinemass Studio banners. The film will release in Telugu, Tamil, Hindi and English languages.