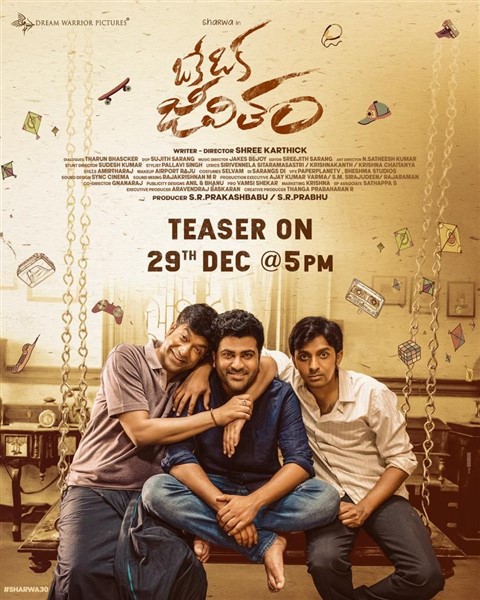 Here comes an interesting update of the movie. Oke Oka Jeevitham’s teaser will be released on December 29th. The announcement poster sees cheerful faces of Sharwanand, Vennela Kishore and Priyadarshi. The trio is seen sitting on a swing.

Tharun Bhascker has penned dialogues for the film billed to be a family drama with sci-fi elements. Telugu girl Ritu Varma stars opposite Sharwa, while Amala Akkineni played his mother. Vennela Kishore and Priyadharshi will be seen in supporting roles.

The music for this film is composed by Jakes Bejoy. ‘Dear Comrade’ fame cinematographer and editor, Sujeeth Sarang and Sreejith Sarang are also part of this movie.

Sharwanand has huge following among family audiences and this film is going to equally cater to family viewers as well as the youth. In fact, films with mother-son bonding will enthral all sections.

The film is slated for its theatrical release in February, 2022.

King Of All Masses Shivarajkumar’s GHOST Is Out On His Birthday...