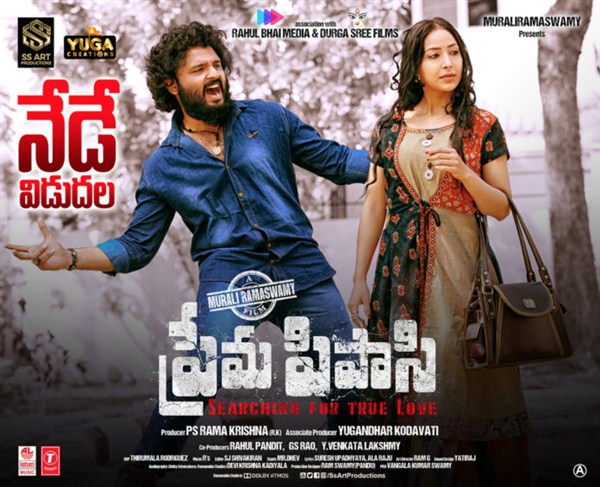 Prema Pipasi is one of the new movies in the Telugu film industry now. GPS (Baala)is the hero of the film. Kapilakshi Malhotra, Sonakshi Varma are seen in the lead roles. Murali Ramaswamy is the director of the movie. Jyothi Rajput, Mamatha Sri Choudhary, Ankitha, Sanjana Choudhary, Suman, Bhargav, Shaking Sheshu, Jabardast Rajamouli were among other artists in the movie. PS Rama Krishna, Rahil Pandit, Yugandha, Vizag Murali and others are producing the film. The movie released today and check out the review of the film here.

Story:
Prema Pipasi is about a frustrated man (GPS) whose journey begins with the search for true love. Something that is holy and pure. The relationships that unfold in his journey of love are the things to watch out for. Each relationship opens up a new dimension that was never seen & expressed before. Amidst all the drama, romance, comedy & thrill, will he finally get the love he is looking for? Is the story of the movie.

Performances:
The lead pair have played their part very well in the film. GPS as a frustrated man is impressive and reminded of Upendra from his earlier Telugu films. The way the story traveled through his character is good. His performance and the way of emoting certain scenes with body language is nice. At the same time, the film’s leading ladies Kapilakshi Malhotra and Sonakshi Varma are good. Both of them played their parts well and impressed one and all. The film has got a talented cast in the other roles. Jyothi Rajput, Mamatha Sri Choudhary, Ankitha, Sanjana Choudhary, Suman, Bhargav, Shaking Sheshu, Jabardast Rajamouli were among others and all of them made their presence felt.

Technical Aspects:
The film has got a strong and very good technical team. The film has good visuals. For the resources and the budget that the makers picked, we can easily say that the film unit pulled off a decent budget. The camera work is good. The music of the film is nice. Especially, the background score in some key scenes has elevated the film perfectly. The movie’s editing is pretty decent. The production values are nice. The producers gave the right support for the team to pull off this project in an interesting manner.

Verdict:
Prema Pipasi is a tale of love that is conveyed through a character that we regularly see in the common people. There are usually a lot of frustrated people in and around us and this is one such character through which the director conveyed the emotion called love. The film unit wrote the script well and pulled out a decent first half. Then, there is a slow pace but the second half is intense and emotional. The interval sequence, as well as the climax, are handled well in the film. On the whole, Prema Pipasi is an intense tale of emotion called Love that impresses well.