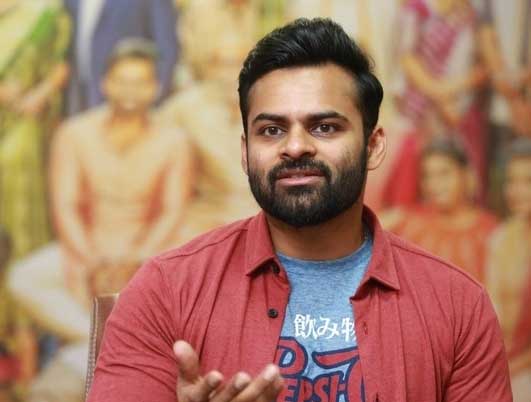 After scoring a hit with Chitralahari earlier this year, mega hero Sai Dharam Tej is now coming up with another film Prathi Roju Pandaage. Directed by Maruthi, this film is all set to release on the 20th of this month. Raashi Khanna played the female lead in it while Satya Raj and Rao Ramesh have essayed the other key roles.

1. What do you want to convey with Prathi Roju Pandaage?

Tej: We tried to showcase how a family should treat their family member, who is in the final stages of his life. This film is the story of a family in which the grandfather is in the dawn of his life. It has all the elements and will be a perfect blend of all the emotions.

2. Does it have similarities with Shatamanam Bhavati?

Tej: No. Our film is entirely different from Shatamanam Bhavati.

3. How is your character in the film?

Tej: I played the role of the grandson who visits his grandfather. AS the grandfather is nearing the completion of his life circle, I try to make him live life to the fullest in those final days.

4. How was your experience of working with Maruthi?

Tej: I know Maruthi, SKN and Bunny Vaas since my MBA days. During that time, Maruthi narrated me a story as well. We were planning to work together for a long time and finally, it got materialized with this film.

5. How are the works of your next film Solo Brathuke So Betteru going on?

Tej: We shot for just three days. The shoot will resume after a gap of one week, post the release of Prathi Roju Pandaage.

You will see a new Rashmika in Bheeshma: Rashmika