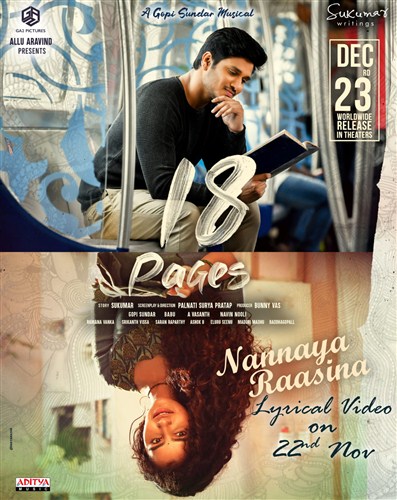 One of the most anticipated romantic films from Nikhil and Anupama Parameswaran-starrer 18 Pages. The film is coming from Geetha Arts which is presenting it. Nikhil and Anupama are paired up once again after Karthikeya 2 blockbuster and their chemistry seems just right.

The melodious song from 18Pages is coming on November 22nd. Today makers announced this exciting news with a beautiful poster. The lyrical titled “Nannaya Raasina” will be another magical melody from Gopi Sunder for sure.

The eye catching poster showed the two different worlds of the leads. The film will be releasing on December 23rd. Bunny Vas from Geetha Arts-2 is producing the project while Palnati Surya Prathap who previously directed Current and Kumari21F is handling the direction department.