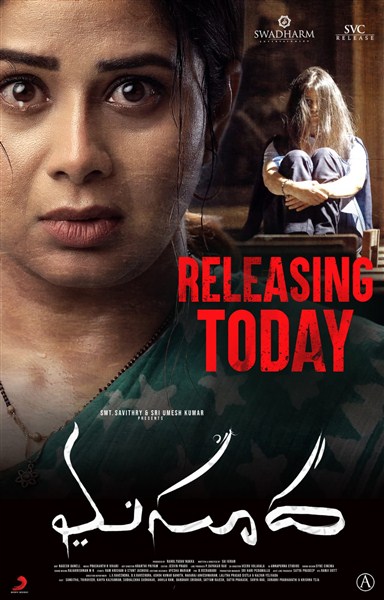 Gopi (Thiruveer) is a software engineer who works in Hyderabad. Neelam (Sangeetha) and her daughter Nazia (Bandhavi Sridhar) are Gopi’s neighbours. All of a sudden, Nazia starts acting weirdly and behaving abnormally. Later, it is known that she is possessed. Who possessed Nazia? How Neelam saves her child? What is Gopi’s role in this? To know these answers, you have to watch the film.

Thiruveer is a perfect fit for this role. He suited the character very well and performed it with conviction. Kavya played the female lead. Though she did her best, she didn’t suit the character. Sangitha gave earnest performance as the mother. Bandhavi Sridhar is decent too. Rest others performed within their character limitations.

Director Sai Kiran seems to be a fan of horror genre. He stuck to the core horror element and made the film without adding any commercial coating. However, the writing falls a bit flat. If the writing was better, Masooda would have become a classic horror flick in modern Telugu cinema.

Nagesh Banell stands out with his cinematography. It is one of the biggest assets of this movie. Prashanth R Vihari’s music is alright. He did well with the background score. The production values are great.

It has been a long time since we saw a true horror film in Telugu. First of all, the makers of Masooda should be appreciated for their attempt. The film starts off well and gets into the core plot right away. But the first half fizzles when the lead characters are established. Again, the film picks up momentum towards the interval.

The second half has some interesting elements. But flat narration makes Masooda a bit boring. There is violence and gore too. So, it may not appeal to all sections of the audiences. The true-blue horror fans can give it a watch.

Punch Line‘;On the whole, Masooda is an average film which could have been made in a better way. However, the team deserves an appreciation for their honest attempt. Go watch it if you are a horror fan