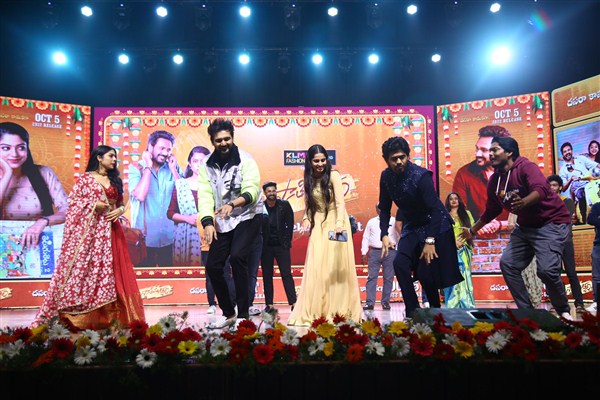 I liked Swathimuthyam’s trailer and wish a stupendous success to the film team.- Naveen Polishetty

Sithara Entertainments is joining hands with Fortune Four Cinemas to come up with a clean, feel-good family entertainer titled Swathimuthyam this Dasara. Ganesh and Varsha Bollamma play the lead roles in the film written and directed by debutant Lakshman K Krishna and produced by S Naga Vamsi.

Ahead of its worldwide release on October 5, the pre-release event was organised at Shilpakala Vedika, Hyderabad. Apart from the cast and crew, Naveen Polishetty graced the event as the chief guest. Renowned filmmaker Trivikram Srinivas, S Radha Krishna, Bellamkonda Sreenivas and Sidhu Jonnalagadda also made their presence felt.

Lakshman K Krishna, the director said, “This is my debut and also the first event where I am speaking amidst such a huge gathering. Ganesh is the reason Swathimuthyam materialised and I thank him for trusting me. Varsha did full justice to her role as Bhagyalakshmi. Rao Ramesh garu is the lifeline of the film. Pragathi Suresh, Naresh, Goparaju Ramana added strength to the lineup.”

“Despite being a newcomer, everyone supported me to the best of their abilities. S Naga Vamsi garu liked my narration and brought me on board after watching my demo. I was in school when I watched Trivikram’s Athadu and it’s an unforgettable memory. If I were to make a film, I felt it had to be of the same quality. It was wonderful to have Trivikram garu appreciate my script,” he added.

Rao Ramesh opined that the film had all ingredients to be a box-office winner. “All characters are integral to the story in Swathimuthyam till the very end. Lakshman made the film with a lot of sincerity. I hugged him after the narration. The film is tailormade for Ganesh and I wish him a successful debut. I congratulate Naga Vamsi, China Babu for choosing such a fantastic script,” he stated.

Varsha Bollamma conveyed her gratitude to China Babu and Naga Vamsi garu for giving opportunities for newcomers to flourish and said that Lakshman was a very honest filmmaker. “He has a lot of clarity over his subject and I hope he makes it big in the industry. Ganesh’s smile is enough to draw crowds to theatres. True to the title, he’s a real Swathimuthyam and has worked hard for the film.” She thanked Naveen Polishetty, Bellamkonda Sreenivas and Sidhu for attending the pre-release event.

Naveen Polishetty mentioned that it was an honour to be the chief guest of the event and remembered days when he was a common man who couldn’t get passes to be at this venue. “I wholeheartedly welcome Ganesh to Telugu cinema. I liked Swathimuthyam’s trailer and wish a stupendous success to the film team. I’ll meet you at the theatres with a film under the same banner next year.”

“Award-winning producer S Naga Vamsi, under the vision of China Babu garu, is taking the banner forward to dizzying heights. Telugu audiences always encourage small-budget films when made well and the success of films like Agent Sai Sreenivasa Athreya, DJ Tillu are proof of the same. I hope Swathimuthyam emerges victorious at the ticket window,” the actor added.

Producer S Naga Vamsi thanked Naveen for being part of the event and expressed his confidence in Swathimuthyam. “The film will entertain audiences across all age groups. It’s a wonderful gesture from Chiranjeevi garu to convey his wishes for our film even as it was raining at his film event. I hope you’ll encourage Swathimuthyam as much as Godfather on October 5,” he shared.

Siddhu Jonnalagadda wished the best for the team of Swathimuthyam and told that Ganesh should consider himself lucky to be launched in a prestigious banner like Sithara Entertainments. “I hope Swathimuthyam continues the banner’s victorious streak after DJ Tillu and Bheemla Nayak.”

Ganesh thanked everyone who came forward to bless him ahead of Swathimuthyam’s release. The script came to him when he was on the hunt for the right script to enter films. “I am sure that my confidence in the script will pay off. I thank Sithara Entertainments for believing in us. I’ll always be indebted to China Babu garu and Naga Vamsi garu. Lakshman deserves credit for telling such a good story.”

The first-time actor called Varsha Bollamma a supportive co-star and was grateful to cinematographer Suryaah for showcasing him well on screen. He applauded the efforts of composer Mahati Swara Sagar, supporting cast including Rao Ramesh, Naresh, Pragathi Suresh and Vennela Kishore. “I’ll always be thankful for my parents and my brother for supporting me in all my endeavours. I hope I’ve done a film that’ll make them proud. I’m assured the film will resonate with audiences this Dasara even amidst the biggies.”

The pre-release event consistently kept the crowds entertained. One of the event’s major highlights was when Ganesh, Varsha and the chief guest Naveen Polishetty came together to groove to the Dum Dum Dum number on the stage. The lead pair had the crowd in raptures as they emulated the dialogues of the popular stars in Telugu cinema. On the whole, it was a happy, cheery evening bursting with young energy and enthusiasm.

Rebel Star Prabhas’ RadheShyam to release on the 11th March in...