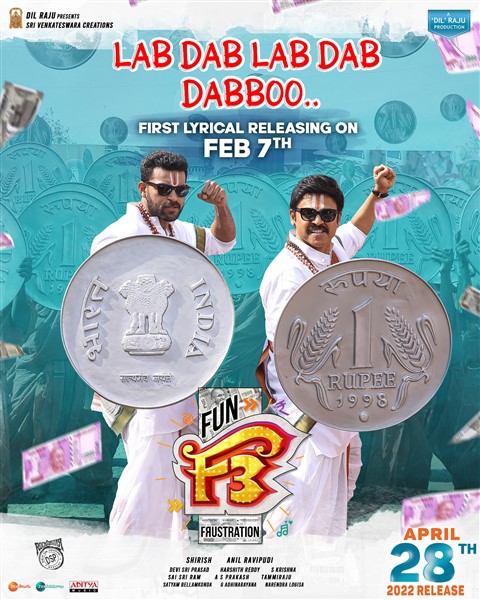 Rockstar Devi Sri Prasad has scored music for F3 and here’s an update on first single of the movie. The first song Lab Dab Lab Dab Dabboo will be out on February 7th. It is known that, F3 revolves around money.

The film’s entire talkie part was wrapped up and only one song is left pending. Post-production works are also underway for the movie which is the franchise for the double blockbuster F2.

While Tamannaah Bhatia and Mehreen Pirzada are the heroines opposite Venkatesh and Varun Tej respectively, Nata Kireeti Rajendra Prasad will be seen in a hilarious role. While Sonal Chauhan is roped in as the third actress to add more glamour, Sunil is zeroed in for an entertaining role. So, F3 will be combination of entertainment, glamor and other commercial ingredients.

Sai Sriram cranks the camera, while Tammiraju is the editor. Harshith Reddy is the co-producer.