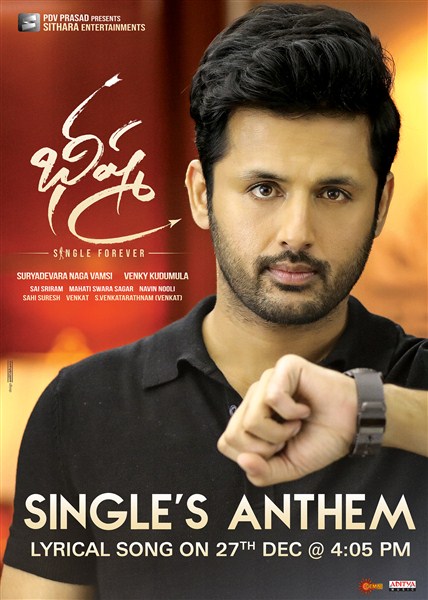 Today they released there first single officially on youtube. Song was composed by Mahathi Swara Sagar ,lyrics by Shreemani and sung by Anurag Kulakarni . Single released in the name of “Singles Anthem” is receiving good response from audiences and fans.
Already released glimpse with dialogue “ na love kuda vijay mallya lantidha ra , kanipestundi kani catch chayalam “ had received amazing response from the audience and became hugely popular on social media platforms .. Movie is going to release on February 2020
Movie Director Venky Kudumula says .. The first single “Singles Anthem” has been released today and we are receiving an amazing response all over.. Nithiin’s and Rashmika pair looks cute and fresh and getting good response. We have released a teaser earlier and it went viral on Social Media. Bheeshma movie story , screenplay , scenes and diologues will be super fresh. Nithiin’s character is designed in such a way that every boy will get connected to the character. Also every girl will get connected to the Rashmika’s character. This becomes romantic entertainer and comedy.

Sonu Sood to impress as Chand Bardai from ‘Prithviraj’