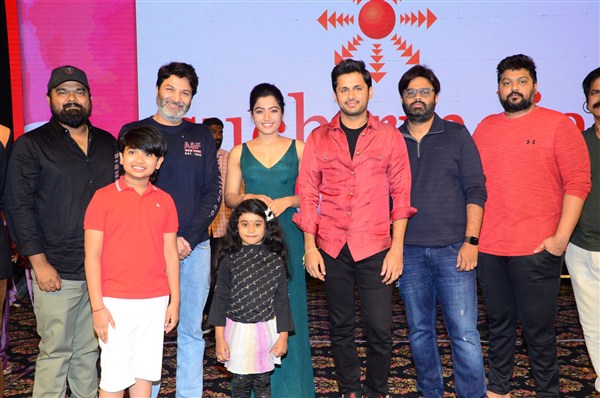 Talented hero Nithiin is currently busy working on an exciting film Bheeshma. Rashmika Mandanna played the leading lady role in the film. Venky Kudumula who earlier made the film Chalo is the director of the movie. The film unit is extremely happy with the way the film is getting a positive response now at the box-office. The makers are pretty much excited about the way things are progressing at the box-office too. Meanwhile, the film unit held a grand pre-release event yesterday night.

The pre-release event became a big hit where Trivikram Srinivas, the director of the recent blockbuster Ala Vaikunthapurramuloo graced the occasion to wish the entire film unit. Trivikram Srinivas spoke great things about the film and the star director has wished Nithiin and the others involved in the movie that Pawan Kalyan’s blessings are always with Nithiin.

Nithiin too revealed that his mother, father, sister, Pawan Kalyan, and Trivikram are his Pancha Pranalu. Mahati Swara Sagar is the music director of the movie. The theatrical trailer of the film is out and received a positive response.

Bheeshma releases on the 21st of this month.