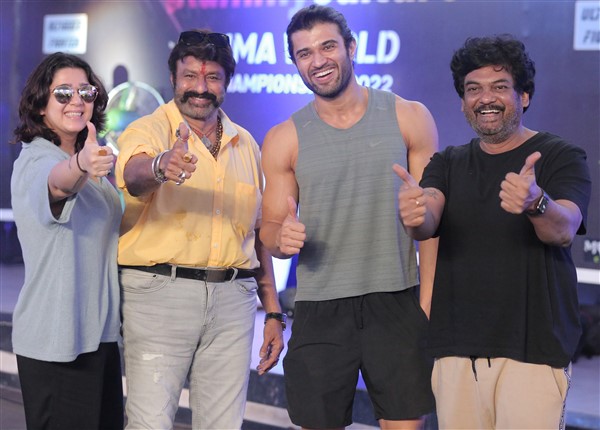 Happening hero Vijay Deverakonda’s first Pan India film LIGER (Saala Crossbreed) being directed by dynamic director Puri Jagannadh is currently being shot in Goa. The makers are filming action sequences on Vijay Deverakonda and foreign fighters in this lengthy schedule. Meanwhile, the team has a special guest on sets today. None other than Natasimha Nandamuri Balakrishna visited the sets, as shooting of his ongoing flick Akhanda is taking place in a nearby location in Goa.

Balakrishna is all praises for the makers as he is spellbound by the grandness of the set. He has appreciated the makers for mounting the movie in huge scale. Balakrishna also liked Vijay Deverakonda’s look in the movie. He then blessed the team and also wished Liger will become a huge blockbuster.

The film in the crazy combination has cinematography handled by Vishnu Sarma, while Kecha from Thailand is the stunt director. Puri Jagannadh, Charmme Kaur, Karan Johar and Apoorva Mehta together are bankrolling the film.

Ramya Krishnan and Ronit Roy play prominent roles in Liger which is being made in Hindi, Telugu, Tamil, Kannada and Malayalam languages.

Pawankalyan and Sri Trivikram reminisce on the special memoir of Sri...