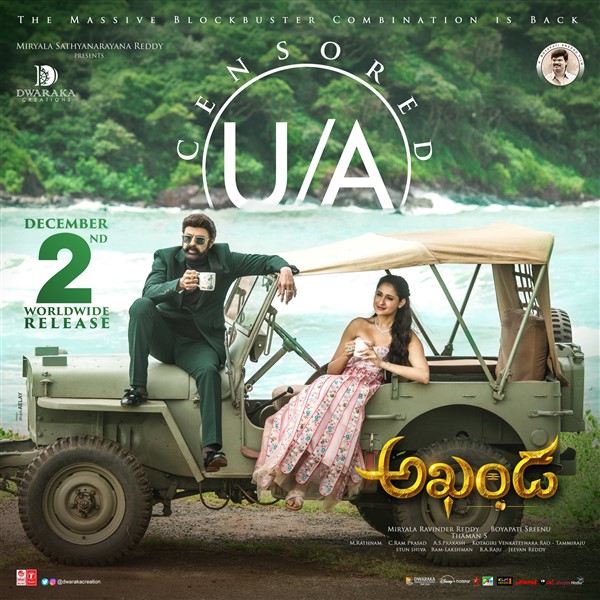 Natasimha Nandamuri Balakrishna and mass director Boyapati Srinu’s most awaited film Akhanda is all set for theatrical release on December 2nd. The film’s censor works were also done and it was awarded with U/A certificate.

Censor officials have appreciated the makers for the grand visuals and drama in the movie. Balakrishna who previously did numerous mass and action roles came up with his best performance. Needless to say, his Aghora character is going to bring mass madness to theatres.

Akhanda character arrives in second half and Boyapati presented Balakrishna in the extreme intense and action avatar. Balakrishna shows his ugraroopam (fury) in the character in second half. On the other hand, Srikanth’s evil acts will be another highlight. Jagapathi Babu and other actors too performed well, while Thaman’s music and rich production values are the other big assets.

Balakrishna and Boyapati collaborated for the third time to complete hat-trick hits in their combination. Miryala Ravinder Reddy is producing Akhanda on Dwaraka Creations. Kotagiri Venkateshwara Rao is the editor.

S Thaman has scored music and first two songs got tremendous response. The theatrical trailer of the movie which was revealed last week got thumping response.