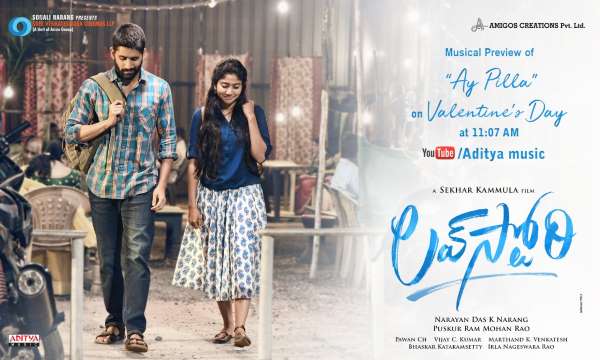 Sekhar Kammula is one of the successful filmmakers in the recent times. The director is coming up with an interesting project titled Love Story. This is his film, right after Fidaa. Love Story has Naga Chaitanya and Sai Pallavi in the lead roles. The makers are extremely happy with the way the things are progressing at the box-office. The film unit finally wanted to kick-start the promotions of the film.

Already, there is a positive buzz going around the film and now, we came to know that the film unit wants to release the first single from the movie. Since it is a love story, on the occasion of Valentines day, the makers announced the launch of the first single of the movie.

The film’s publicist posted on Twitter about the same. “This Valentine’s Day is gonna be extra special with #LoveStory😍 Musical Preview of #AyPilla at 11:07am on @adityamusic @chay_akkineni @Sai_Pallavi92 @sekharkammula #SreeVenkateswaraCinemasLLP #AmigosCreations #NC19” they posted.

Peene Ke Baad Song From Akash Puri’s Romantic Is Out