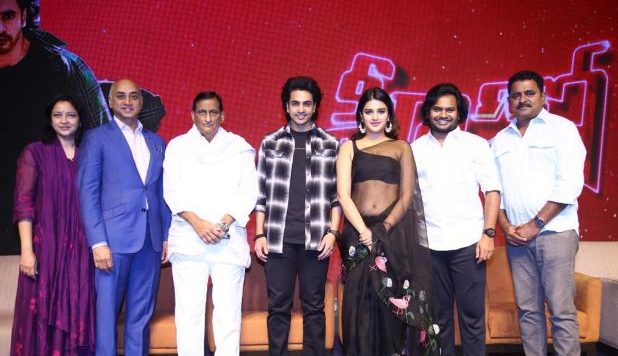 The film is all set for a grand release worldwide on January 15th for this Pongal. The team hold a press meet today and it was attended by Ashok Galla, Nidhhi Agerwal, Sriram Aditya, Jayadev Galla, Padmavathi Galla and Adiseshagiri Rao.

Adiseshagiri Rao informed that his brother superstar Krishna suggested to release the movie for Sankranthi. He further said that Hero is a pucca commercial entertainer with all the ingredients incorporated in it.

Nidhhi Agerwal said, “Though Ashok is a newcomer, he’s a very talented guy. His dancing and acting are exceptional. It’s not at all like Hero is his very first movie. He indeed pulled off the role efficiently. Director Sriram Aditya is a perfectionist. Though I played doctor in this film as well, my character is completely different from iSmart Shankar’s.”

Sriram Adittya said, “Adiseshagiri Rao gave us the push to release the film for Sankranthi. I have been waiting to release the movie. We’ve seen films getting postponed for last couple of weeks. Given it’s a wholesome entertainer, Sankranthi is the perfect date for Hero. Jagapathi Babu will get an award for this film. Naresh has done a superb job. When I first met Ashok, I I got confidence after seeing his smile. However, he surprised me with his acting. You’ll all surprise for sure. One thing I can assure you all, you don’t believe it’s his first movie. He has done humour with ease. Ashok has become a brother to me. There’s completely positive atmosphere during the making. There will be whistle worthy scenes for superstar fans. It’s a perfect festival movie.”

Ashok Galla said, “I have been waiting incessantly for the release of this film. It’s a dream come true for me. As the movie is releasing for Sankranthi, our energy reached next level. I’m happy that Krishna and Mahesh Babu fans are loving Rap Song. We all worked like a family. If the audience love the movie, it’s like we hit the bullseye.”

Kajal back in Rana Compound