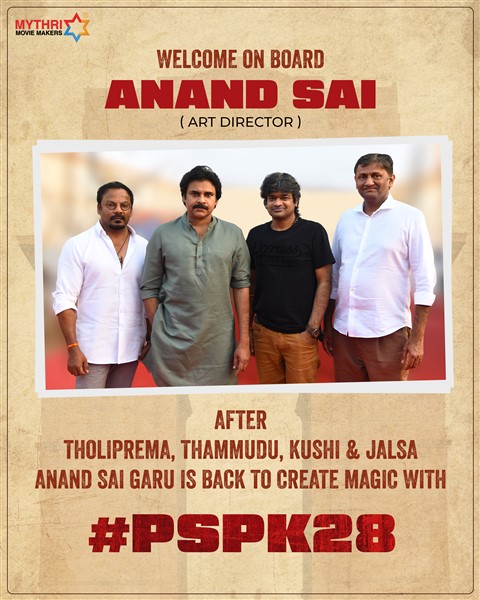 Anand Sai as an art director needs no introduction. Starting from Power Star Pawan Kalyan’s ‘Tholiprema’ to Mega Power Star Ram Charan’s ‘Yevadu’, Anand Sai has worked for nearly hundred movies, winning appreciation, accolades and state government awards for his work. After dedicating the last five years of his expertise for the Yadadri Sree Lakshmi Narasimha Swamy temple as the chief architect, he has decided to step back into films since the temple is in its last leg of completion. After a small hiatus, he would be on sets as the art director for the prestigious project produced by popular production house Mythri Movie Makers in the combination of Power Star Pawan Kalyan and director Harish Shankar with grandeur. It is notable that both his debut and his comeback film are with Power Star Pawan Kalyan. The producers of Mythri Movie Makers Mr. Naveen Yerneni, Mr. Y. Ravi Shankar along with director Harish Shankar have welcomed art director Anand Sai and have officially announced his name as the Art Director with a poster on social media.

Magnificent Art Director Anand Sai garu is back to Cinema after dedicating his 5 years of craftsmanship for Yadadri Temple – The Pride of Telangana.

Welcome on board Anand Sai garu for #PSPK28 💥💥