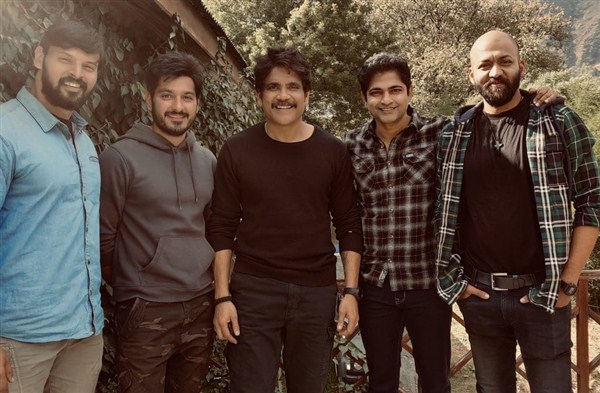 Matinee Entertainment’s 6th project ‘Wild Dog’, starring Akkineni Nagarjuna in the main lead is directed by Ahishor Solomon. Nagarjuna has wrapped up his work for the film and is heading back to home from Manali. Calling them the talented team, Nagarjuna says he is feeling sad to say goodbye to them.

“Heading home after wrapping up my work for #WildDog !!feeling sad as I say good bye to my talented team and the Himalayas!! #manali @MatineeEnt @SaiyamiKher @ActorAliReza @onelifeitiz @mayankparakh19 @bilal06858696 ,” posted Nagarjuna on his Twitter page.

The team, however, will continue the shoot and wrap up the complete shoot before heading back to Hyderabad and start post production.

Reportedly based on true incidents, the film sees Nagarjuna essaying a different character as ACP Vijay Varma who is given the nickname of Wild Dog for his character streak of dealing with criminals severely.

Dia Mirza is the leading lady, while Saiyami Kher will be seen in a crucial role.

This production venture of Matinee headed by Niranjan Reddy and Anvesh Reddy has cinematography by Shaneil Deo, action by David Ismalone and Sham Kaushal, co-produced by N M Pasha and Jagan Mohan Vancha.

The following are the credits:

I hope you all like Ranarangam – Director Trivikram *Press Note*