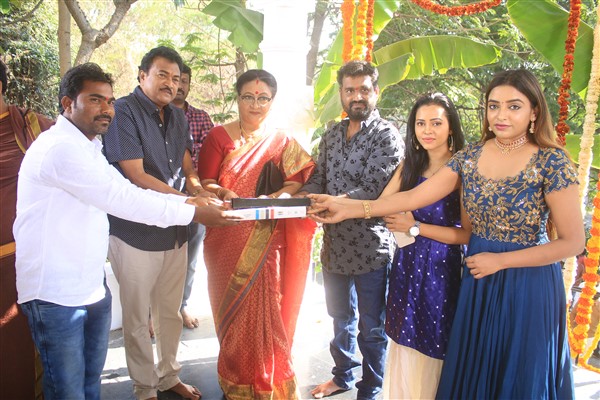 Producer Gogula Narendra has announced a film with ‘Kerintha’ fame Parvateesam as the hero. Titled ‘Savitri W/O Satyamurthy’, this one is produced on A1 Mahendra Creations. Chaithanya Konda, who has previously worked under Puri Jagannadh in the direction department, is making his directorial debut. Senior artist Sri Lakshmi will be seen as the male lead’s wife. How the 60-year-old woman ended up marrying the 25-year-old male lead is going to be very interesting. On Wednesday, the film’s puja ceremony was held at Hyderabad’s Ramanaidu Studios. Well-known director-producer Tammareddy Bharadwaj gave the clap for the muhurath shot. The regular shoot began today.

Speaking on the occasion, director Chaithanya Konda said, “My friend Narendra is producing my first movie. We have known each other for several years and had been planning to do a film together for two years. Before this, I had narrated to him a couple of stories. Since they are regular stories, we both were dissatisfied. This is when I came up with the story of ‘Savitri W/O Satyamurthy’, which immediately satisfied the producer. How a 25-something became the husband of a 60-something female is the crux of the story. It’s a complete family entertainer that can be watched by everyone in the family. Parvateesam is best suited for the role. I chose him because I loved him in ‘Kerintha’. Siva Reddy and Suman Shetty will be seen as his sons. Jenny will be seen as his brother.”

Producer Gogula Narendra said, “I am feeling fortunate to be making a debut with this movie. This is a sensible entertainer that will be a laugh riot. The regular shoot was begun today. The Hyderabad schedule will go on for 25 days. A 20-day outdoor schedule is being planned. We will complete the filming in 45 days.”

Actress Sri Lakshmi said, “I have played a wide variety of characters over the years. And I am back to playing a new kind of character now. Although I am late, I am back with the latest! I have never played such a character before. Parvateesam, who should be playing my son, is my husband in this film. It’s funny!”

Parvateesam said, “‘Kerintha’ made me popular. I am confident that ‘Savitri W/O Satyamurthy’ will be even better. This is a hilarious entertainer. I am fully confident about the story.”

Actor Siva Reddy said, “The director has written an amazingly entertaining character for me. I was going in a car when he called me and narrated the storyline. I stopped the car after a while and listened to the story. I was bowled over. I agreed to do the film immediately. I hope Chaithanya, who has worked under the daring and dashing director Puri Jagannadh garu, is going to deliver a big hit. This is an out and out comedy entertainer.”

Music director SK Khuddus said, “The composition of songs was completed yesterday. There are three commercial songs in the movie, all of which are situational and story-based. I have done 18 movies so far. And I hope this film will give me my first break. I am happy that Narendra garu has turned a producer.”

Actor Janardhan (Jenny) said, “I am playing the male lead’s younger brother. I am 70. So, I wondered if the hero is 80 in the film. Then he told me the story. The hero’s age is 25 in the film! I thank the director for this opportunity. The very title of the film is both funny and indicates dharma. The title shows the director’s talent.”

YS Jagan to take action on that MP?