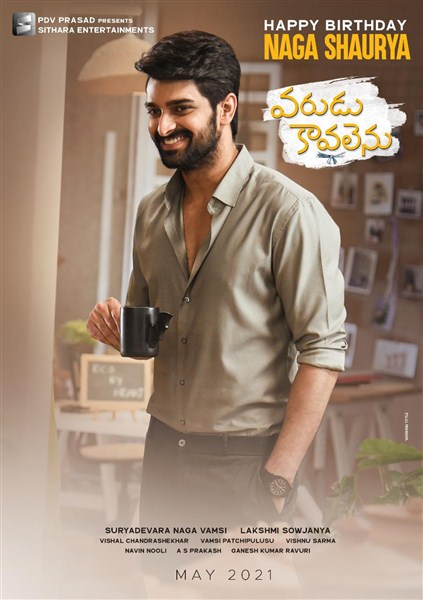 Our charming hero Naga Shaurya‘s birthday today (22-1-2021). On this occassion ‘Varudu Kaavalenu’ film unit has released an interesting teaser. In the teaser it is shown that our charming hero is getting dressed up in more style and elegant way. At the end of video it will be known that May end 2021 would be the release. Like before this teaser also carries an interesting background music by Vishal Chandrashekhar.

Earlier while releasing the title an official video has been released. That trailer also had more beautiful visuals of our charming Hero Naga Shaurya and elegant beauty Ritu Verma. For this small byte Vishal Chandrashekhar’s music took it to next level and people enjoyed the music and got very well response. Then released the 2021 new year wishes video, another teaser has been released. In that teaser Hero Naga Shaurya and Ritu Verma looked very nice as a couple and got excellent response from the public on social platforms as well as in media. Now the shoot schedule is happening in a brisk pace. ‘Varudu Kaavalenu’ story, screenplay, dialogues, songs and emotional scenes between lead characters according to the story will definitely entertain all kind of audiences says director and producer.