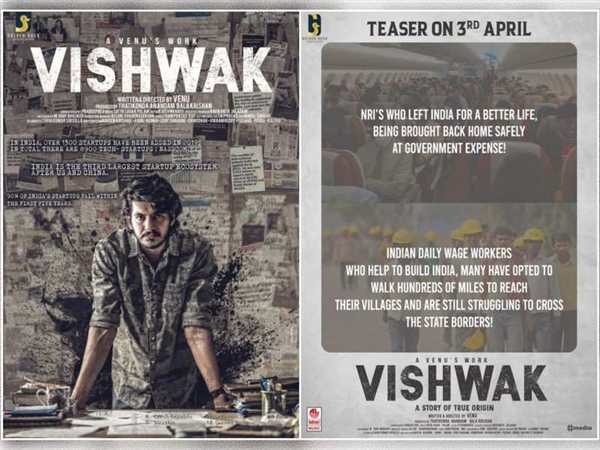 Usually, a lot of small-budget flicks make their way to theatres every week. Like every week, this time also, a small film is hitting the screens. However, one film that released last week has created a good buzz in the film nagar. Titled Vishwak, the film’s promotional material has impressed everyone. Now, the movie hit the screens and received a good talk. Check out the review of the film here.

Story:
The story of Vishwak revolves around the lead protagonist. In the film, Vishwak’s father gives 25 lakhs to him and sends him to a foreign country. However, Vishwak wants to do business in India itself but looking at many people leaving the country, he decides to confront all of them asking them to stay back. In the process, he encounters many struggles. What are they? Did he succeed? What happens in the end? Forms the story of the film.

Performances:
Ajay Kathurvar and Dimple played the lead roles in the film. Both the lead actors played their parts well and impressed everyone. The performances by the lead actors have taken everyone by a surprise. Also, interestingly, the supporting cast too did their best in the movie. All in all, the casting has been made perfect and all the actors made their presence felt by putting forward some best performances.

Technical Aspects:
Venu Mulka is the film’s director who has penned an amazing story. For the same, he has penned a very good screenplay too. The dialogues are interesting. Satya Sagar Polam has come up with very good music album for the film. At the same time, his background score is also very much impressive. The cinematography of Pradeep Dev is very good. The editing of the film is crisp and the technical team have given their best. The production values of Tatikonda Anandam Bala Krishna are grand and lavish.

Verdict:
A lot of Indians are becoming NRI’s by going abroad and settling there. The director has cleverly included the elements like unemployment in the film and tried to make a very interesting film around it. He also traced down the emotions of the parents who send their children to the USA. The film has a very good message and Vishwak is one film that is recommended to watch by everyone. Do not miss it in theatres.

Punch Line: Vishwak is an engaging film with a beautiful message!