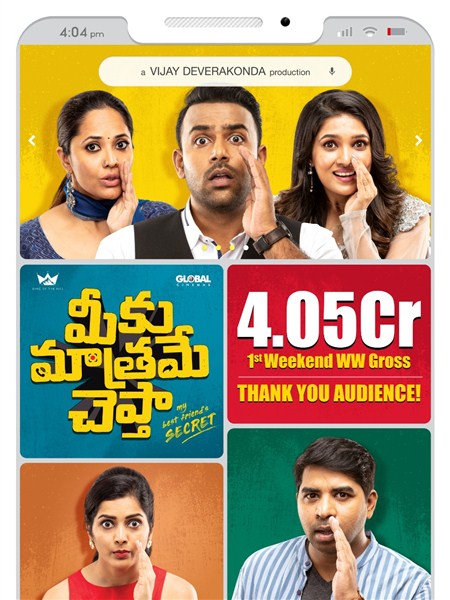 Sensational actor Vijay Deverakonda turned as a producer and made his maiden production venture, Meeku Maatrame Chepta. He introduced Pelli Choopulu director Tharun Bhascker as the lead hero with this movie. Starring Abhinav Gomatam, Anasuya and Vani Bhojan in the other important roles, this film has hit the screens last Friday.

Right from the promotional stages, the film carried a positive buzz among the audience and Vijay’s stardom further raised the expectations on it. Even after the release, Meeku Maatrame Chepta is performing well at the box office with a positive word of mouth. Especially, the audience is enjoying the camaraderie between Tharun and Abhinav Gomatam.

In the three days of its release, Meeku Maatrame Chepta collected a gross of Rs. 4.05 crores at the box office. As it got made on a shoestring budget, we can easily state that the movie entered into the profits zone. On the whole, Vijay scored a thumping success as a producer right with his first project itself.