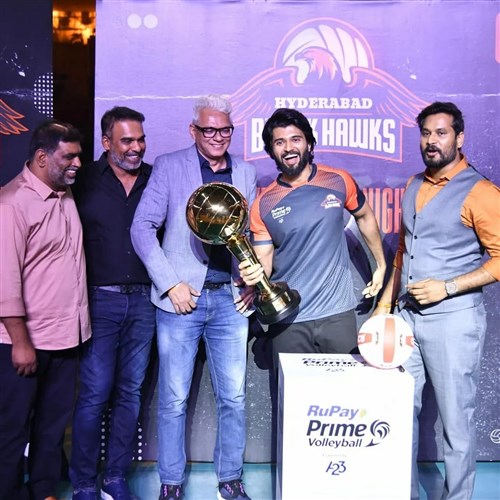 Actor Vijay Deverakonda, the young superstar who has a phenomenal fan following across the country and a recipient of several awards including a Filmfare Award, Nandi Award, and SIIMA Award, has become a co-owner of the Hyderabad Black Hawks, one of India’s top professional volleyball teams and the sole representative of the Telugu states.

Mr. Deverakonda, well known for his roles in Pelli Choopulu and Arjun Reddy, will also be the brand ambassador for the Black Hawks, with appearances and promotions aimed to take the team beyond the league matches and bring it before a global audience. Mr. Abhishek Reddy Kankanala, the principal owner of the Black Hawks, said, “We are excited to have Vijay joining us, both as a co-owner and a brand ambassador. He brings a new perspective into the mix that can really push our brand to the next level, and advance our organization a massive step towards achieving our vision as THE team that represents the spirit and culture of Telugu people across the world. We are thrilled about what is to come.

“Mr. Deverakonda, reflecting on all the discussions leading up to this monumental partnership, said, “The Black Hawks is more than just another sports team. To all of us, who proudly display our Telugu heritage, it is a representative of the Telugu people, and a symbol of our spirit and strength. I will do whatever it takes to take our team and our brand to all parts of India and beyond.

“On the subject of where the Black Hawks is going, the pair said, “Our goal is our people — to elevate their lives on every level. [Prime Volleyball League] matches are only the start. It is our vision to take volleyball to all corners of the country, to all ages, all genders, all backgrounds, and all levels of athleticism. We want to empower our rural communities the same way as our cities, and level the playing field for all of our children. We want volleyball to be more than just a sport — we want to transform it into something that can help and benefit everyone.

The inaugural season of the league was a huge success. Simultaneously broadcasted in English, Hindi, Tamil, Telugu, and Malayalam, the matches generated a cumulative television viewership of 41 million and streaming viewership of 43 million. In addition, the season garnered over 5 million fan engagements across various digital platforms, as well as forming massive regional connections on social media platforms, such as Share Chat and Moj.

The upcoming second season of the league, featuring 31 matches running from the 4th of February to the 5th of March, will be broadcasted in India exclusively by Sony Sports Network on Sony Sports Ten 1, 3, and 4, and can be streamed live on Sony LIV. Internationally, the matches will be streamed by Volleyball World, the commercial arm of volleyball’s global governing body, Fédération Internationale de Volleyball (FIVB).

The Hyderabad Black Hawks is a professional men‘s volleyball team based in Hyderabad, known for its younger average age, unrelenting energy, and a penchant for thinking beyond the script. Led by the vision of its principal owner, Abhishek Reddy Kankanala, the team earned its reputation through solid on-court performances and extravagant off-court fan engagements. The Black Hawks was a semifinalist during the inaugural season, knocked out by the Ahmedabad Defenders in an electrified match right down to the wire.

Abhishek Reddy Kankanala is an innovator and entrepreneur, based in Hyderabad, with over 20 years of experience in directing successful businesses, and currently operating multiple sports teams, logistic companies, and more. In addition to the Hyderabad Black Hawks, he is also the principal owner of the Bengaluru Raptors, a two-time world champion of the Premier Badminton League, and the DevPixel Devils of the Telangana Premier Golf League.

Vijay Devarakonda a young indian superstar who broke-through with incredible performances in Telugu cinema now does cinema nationally. He is also a serial entrepreneur- Alongside the BlackHawks Hyderabad conservatory team Vijay owns his own streetwear fashion line Rowdy, a Theater Multiplex “AVD”, co-owner of regional digital Platform AHA and a movie production house King of the Hill entertainment.