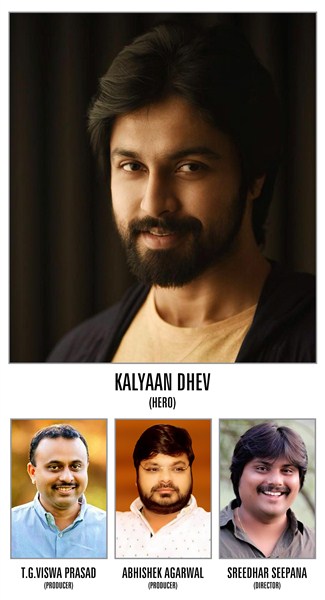 Multiple Production Houses collaborating for projects in Indian cinema to back good content has become a recent practice these days and it continues to happen so. And continuing the trend, three popular Studios have come together yet again for a big project in Tollywood.

GA 2 Pictures, which has bankrolled films like Bhale Bhale Magadivoy, Geetha Govindam and Prati Roju Pandaage, will present a film which will be jointly produced by TG Vishwa Prasad, Abhishek Agarwal under the banners People Media Factory and Abhishek Agarwal Arts. Kalyaan Dhev, son-in-law of Megastar Chiranjeevi and who made his debut with recently released Vijetha, has been signed on to play the lead role in this yet untitled film. The film will be directed by debutante Sreedhar Seepana who has worked on films like Venkatesh’s Namo Venkatesa and Mahesh Babu’s Dookudu as a writer.

“Having worked as a writer for many films, I’ve made this script which I feel would work greatly. I felt Kalyaan Dhev was the right actor for this script. The script has all the elements in it like love, emotions etc and makes it a complete family entertainer. I would like to thank my producers for giving me this opportunity and would do my best,” said director Sreedhar Seepana.

More details about the complete cast and crew will be revealed soon. The shooting of the film will begin in March this year.