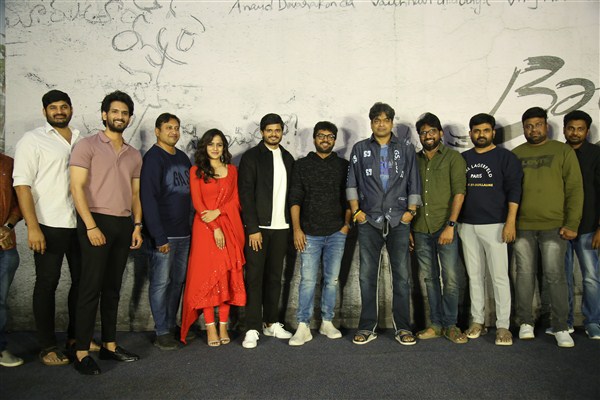 ‘Baby’, starring Anand Deverakonda, Viraj Ashwin and Vaishnavi Chaitanya, is produced by SKN and director Maruthi under Mass Movie Makers. Sai Rajesh is directing the movie. It is gearing up for a release now that it’s a completed project. Its teaser has been released at an event held in Hyderabad. Star directors Anil Ravipudi, Harish Shankar, Mallidi Vasishta, Venkatesh Maha and Vi Anand graced it as guests.

Speaking on the occasion, director Sai Rajesh said that he wrote the story based on a real-life incident that took place in Tamil Nadu. “I added entertainment quotient like how Maruthi does. I am confident that the movie is going to be lauded. We have made a really honest attempt. I am confident that everyone is going to call me ‘The director of Baby’ after this. Even though I am not perfect when it comes to narrating a story, Anand Deverakonda believed in the soul of ‘Baby’. He gave his fullest cooperation. Viraj Ashwin, too, was fully supportive. Producer SKN never put pressure on me even though the budget was shooting up. Vaishnavi’s performance will be talked about by one and all.”

Producer SKN said, “Maruthi is my big support system with whom I started Mass Movie Makers with the intention of encouraging young talents and novel stories. Maruthi’s upcoming movies will be different from what he has done thus far. ‘Baby’ has been made with full faith in its subject without compromises. You are going to watch a beautiful love story. Anand is this film’s backbone. Viraj has given the best performance. The heroine’s character is like the film’s soul. Her acting talent will arrest you. We are going to do three more films with her. ‘Baby’ is going to be a milestone movie for our banner.”

Hero Anand Deverakonda said, “It’s said that I prefer content-oriented and realistic movies. ‘Baby’ challenged me and gave me great satisfaction. It’s also my career’s most commercial movie thus far. I worked hard for 1.5 years on it. I will also be seen in multiple looks. Not just me, everyone has given their all for this movie. I thank director Sai Rajesh for choosing me. ‘Baby’ was also greenlit by Maruthi garu, whose sense of judgement is very strong. The emotional core of our film is going to impress the audience.”

Heroine Vaishnavi said, “I thank the director and the producers for this opportunity. This is going to be my career’s best role. I am happy that the makers reposed faith in me and chose me. ‘Baby’ is rich in beautiful emotions.”

Hero Viraj Ashwin said, “The emotions in ‘Baby’ are relatable. The execution is better than the narration by the director. We loved the subject and did the movie. I am eagerly waiting to watch it on the big screen. Anand’s performance is lovable. He is a surprise in the school-goer’s look.”

Director Maruthi said, “This story will definitely impress the audience. The director has told the story in the way the audience would like. Anand and Viraj have done a nice job. The film has satisfied us fully. We have not compromised on the budget anywhere. We never made financial calculations. The criticisms we receive motivate us to do better. With ‘Baby’, Sai Rajesh is going to grow bigger.”

Director Venkatesh Maha said, “SKN, Maruthi and Dheeraj are passionate about cinema. They have brought out ‘Baby’ due to their passion. I hope ‘Baby’ becomes a classic.”

Director Anil Ravipudi said, “Whenever my films come out, SKN says they are super-hit. The teaser of ‘Baby’ is proof that the outcome will be awesome if passionate individuals join hands. Autorickshaws feature golden lines about love. Even if they are grammatically inaccurate, their summary is right. The ideas in ‘Baby’ are going to hit the bull’s eye.”

Director Mallidi Vasishta said, “I have a feeling that ‘Baby’ is going to be another ‘Nuvvu Nenu’ and ‘Jayam’ for the Telugu film industry. I wish the team all the best.”

Director Harish Shankar said, “Our audience appreciate a ‘Baahubali’ and a ‘Bhale Bhale Mogadivoy’. Every Friday belongs to someone or the other. Sai Rajesh must henceforth call his future movies ‘From the director of Baby’. It’s also great that Maruthi, who himself is a director, has produced this movie. The teaser is full of feel. The lead actors are looking great.”

Fierceful first look of menacing Aadhi Pinisetty from The Warriorr