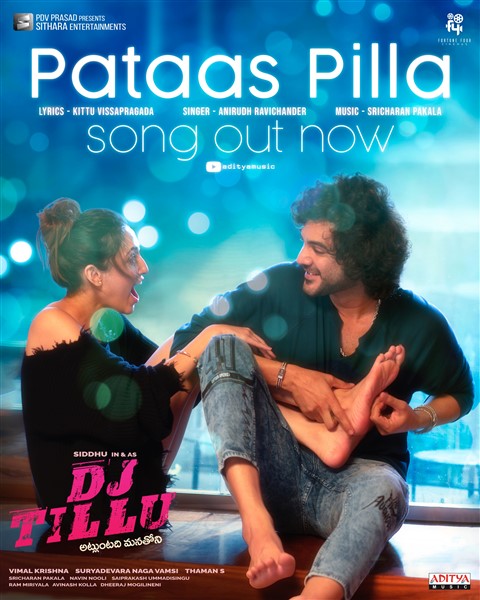 “Sri Charan Pakala had first sent me the tune till the pallavi. The phrase Pataas Pilla was born immediately after listening to it and the director Vimal Krishna, the film team took a liking to it immensely. After understanding the song situation, I wrote the entire lyrics. Vimal had given me a clear idea of the song’s visuals and it lent a new dimension to the song,” Kittu Vissapragada shared.

“I’ve written over 30 songs for Sri Charan to date and our mutual understanding helped us finish the song earlier than expected. Anirudh Ravichander’s vocals were the icing on the cake. Much like everyone in our team, I’m sure Pataas Pilla will find a place in the hearts of every listener,” he further added, exuding optimism.

There’s no doubt that DJ Tillu, through its promos, songs and teaser, has warranted the interest of movie buffs and music lovers alike. In-form music director S Thaman is composing the background score for the project. The film’s supporting cast includes Prince Cecil, Brahmaji, Pragathi and Narra Srinivas. DJ Tillu is all set to storm theatres soon.

Sung by the Rockstar @anirudhofficial ⚡

Jagapathi Babu will get a lot of jovial characters: KL Damodar...