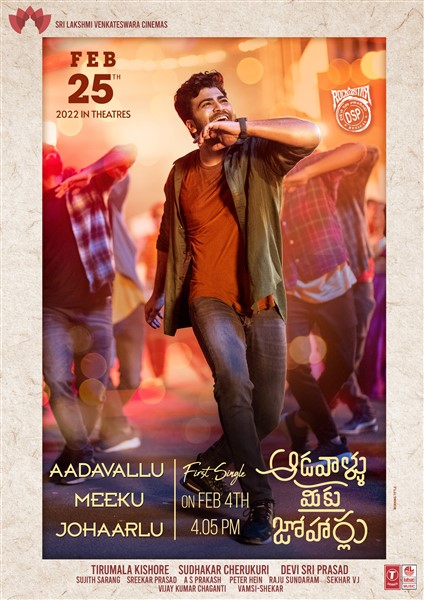 Young and happening hero Sharwanand’s out and out family entertainer Aadavaallu Meeku Johaarlu being directed by Tirumala Kishore under Sudhakar Cherukuri’s Sri Lakshmi Venkateswara Cinemas banner with the most sought-after actress Rashmika Mandanna playing the female lead is getting ready for its theatrical release on February 25th.

Meanwhile, the film’s musical promotions begin from 4th of this month. The makers through this poster announced to release first single- title song (Aadavaallu Meeku Johaarlu), on February 4th at 4:05 PM. Sharwanand looks joyful in the poster as he is seen dancing alongside dancers here. Rockstar Devi Sri Prasad rendered soundtracks for the movie.

The title itself suggests the importance of female characters in the movie. Khushbu, Radhika Sarathkumar and Urvashi are playing important roles in the film that also features some stellar cast.

Be Ready To Get The Ever Loving Shit Beat Out Of...