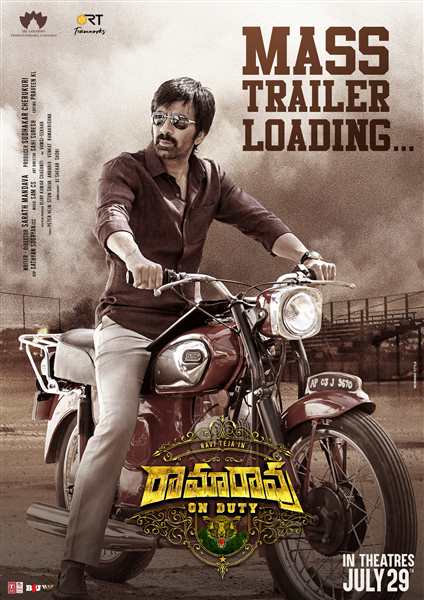 Mass Maharaja Ravi Teja’s most awaited flick Ramarao On Duty under the direction of debutant Sarath Mandava is all set for a grand release worldwide on July 29th. Sudhakar Cherukuri is making the movie on lavish scale under SLV Cinemas and RT Teamworks.

The film’s mass trailer is loading. It will be out soon. The announcement poster presents Ravi Teja in a class and stylish avatar. The actor will be seen as Tahasildar in the movie.

The film’s story is based on real incidents and it is set in the backdrop of 1995. Post-production works are underway for the movie that stars Divyansha Kaushik and Rajisha Vijayan as the heroines.

Cinematography for the movie is by Sathyan Sooryan ISC, while Sam CS rendered soundtracks. Praveen KL is the editor.

The team has opted for vigorous promotions.