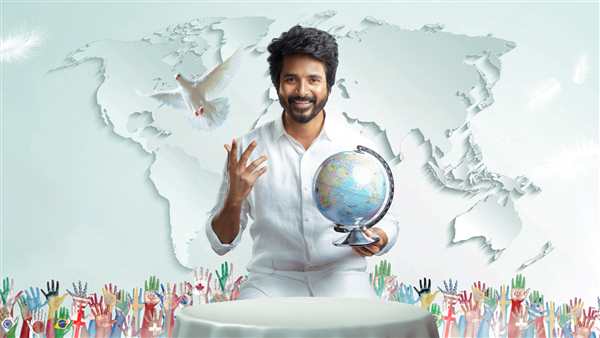 Sivakarthikeyan is equally popular in Telugu as his last few movies did well in the Telugu states. With double the josh, he is coming up with a wholesome entertainer ‘Prince’ which is being directed by the very talented director Anudeep KV. A couple of days ago, the makers had released the first look posters of hero Sivakarthikeyan and actress Maria Ryaboshapka. The pairing looked fresh and adorable.

The film is in its last leg of shooting. Meanwhile, the makers announced the release date of the movie through this hilarious video. Sivakarthikeyan and Anudeep blame Sathyaraj for the delay, but they become silent after Sathyaraj enters the room. Finally, Maria arrives and joins the conversation. The discussion happens in Telugu, Tamil and English languages. At last, they announce the special occasion of Diwali for the movie release.

Anudeep who impressed big time with his last movie Jathi Ratnalu is making sure the promotional material too is unique and entertaining. Prince is the first movie to announce its release for this Diwali.

With the blessings of Narayan Das Narang, Suniel Narang, along with D. Suresh Babu and Puskur Ram Mohan Rao are producing the movie under the banners of Sree Venkateswara Cinemas LLP, Suresh Productions and Shanthi Talkies. Sonali Narang is presenting the movie.

S Thaman is the music director , while Manoj Paramahamsa is the cinematographer. Praveen KL is the editor and Arun Viswa is the co-producer.

Protests unstoppable on NRC and CAB