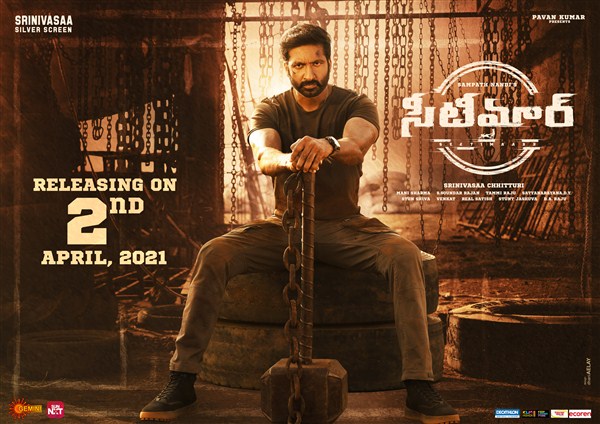 Aggressive Star Gopichand’s latest is ‘Seetimaarr’ Directed by Mass Director Sampath Nandi. This with a backdrop of mass game Kabaddi is being made as a Sports, Action film. Gopichand is playing as a coach to Andhra Female Kabaddi Team while Milky Beauty Tamannaah is playing the role of a Coach to Telangana Women Kabaddi Team. Seetimaarr is being made with highest budget in Gopichand’s career with high technical values. Presented by Pavan Kumar and Produced by Srinivasaa Chhitturi under the Srinivasaa Silver Screen banner. Melody Brahma Mani Sharma is composing music for this film. Bhumika is playing a pivotal role. Looks of Aggressive Star Gopichand and Tamannaah as Jwala Reddy released so far have garnered superb response. Latest is the makers unveiled a powerful mass poster featuring Gopichand aggressively revealing that ‘Seetimaarr’ is releasing worldwide on April 2nd. This mass Poster of Hero Gopichand holding a big hammer is getting tremendous response.

Producer Srinivasaa Chhitturi said, ” ‘Seetimaarr’ is the highest budgeted and huge commercial film Gopichand Gari career. This is an emotional rollercoaster ride with a sports backdrop. Every scene is heart touching. ManiSharma Garu has composed superb songs and music. Entire talkie part has been completed. Balance two songs will be shot very soon. We are releasing ‘Seetimaar’ which is prestigiously made on our Srinivasaa Silver Screen banner in the combination of Gopichand and Sampath Nandi worldwide on April 2nd as a Summer Special.”