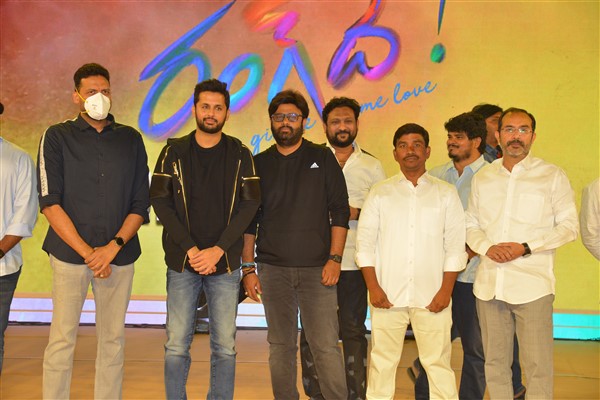 The trailer launch event of ‘Rang De’ starring Nithiin and Keerthy Suresh in the lead roles was held in Kurnool amidst the presence of Nithiin fans and audiences. A directorial of Venky Atluri, the film is produced by Suryadevara Naga Vamsi under Sithara Entertainments banner. The film is all set for a worldwide release on March 26th.

The event by was graced MLAs and others. Speaking on the occasion, Kurnool MLA Abdul Hafeez Khan wished the team of ‘Rang De’ good luck. He also appealed to Nithiin and film industry people to shoot their films in the city.

Kurnool Municipal Commissioner Balaji also graced the event. Addressing the event he said, “During his preparation for civil services, he used to watch films every weekend. I watched every film of Nithiin from ‘Dil’ and I wish him all the best for ‘Rang De.’ I will be watching this movie on first day for first show,” said Balaji.

Speaking DG Bharat said, “Nithiin is son of Kurnool. He is looking very young with every film and in ‘Rang De’ he appears even more handsome. Films shot in Kurnool have turned into huge blockbusters and I wish that ‘Rang De’ will also become hugely successful.”

Producer Naga Vamsi said, “Within a short notice, many guests graced this event. I would like to thank each one of them. Special thanks to the people of Kurnool and on 26th of this month, we expect the same reception for our ‘Rang De.’ We hope the film becomes a big hit.”

Comedian Abhinav addressed the event. “Our film ‘Rang De’ is arriving at the box office on March 26th. This is a complete family entertainer and everyone worked very hard for this film for one year. Due to lockdown the film got little delayed but there will be ample of entertainment and watch it only in theatres. Nithiin, Vennela Kishore, Suhaas and myself will provide good laughs for sure.”

Last but not least hero Nithiin entertained the fans. Speaking he said, “I would like to thank MLAs Hafeez Khan, Sudhakar and DG Bharat for launching the trailer. This is my visit to Kurnool and I’m humbled by your love. Kurnool is famous for Kondareddy Buruju and all the films shot on his backdrop were blockbusters. I see the same power in all of you and I like the energy in you all. Generally they say Rayalaseema is famous for mass and faction films but I witnessed a huge love and so we are arriving with a pure love story on March 26th. Watch ‘Rang De’ with the same love and bless me and my team.”

On the absence of the heroine and director, Nithiin said, Keerthy Suresh and Venky Atluri gave hand in the last minute.

Before Nithiin addressing the gathering, he interacted with fans. A female fan told him that after wedding, he has become skinnier. Replying Nithiin said, “Yes I’m doing a lot of household works and stuff. This is the result.” He went into the public and clicked a few selfies with fans.

Rang De Trailer launch event was organised by Shreyas Media while Shyamala and Bhargav were the hosts.