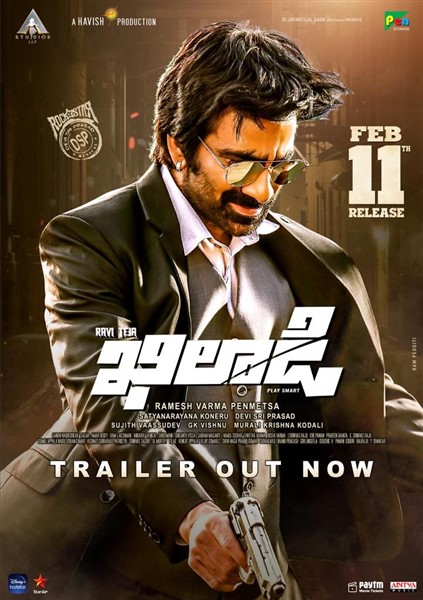 Mass Maharaja Ravi Teja and director Ramesh Varma’s stylish action entertainer Khiladi produced by Satyanarayana Koneru is all set for a grand release worldwide on February 11th. There’s huge anticipation for the film as songs and other promotional content enthused movie buffs. Today, the makers launched theatrical trailer of the movie, four days ahead of its theatrical release, to further hike prospects.

Going by the trailer, Ravi Teja has played duel shaded role and he is equally exceptional both the characters. While he appeared cool and classy avatar in one role, he is a scammer in another character. Arjun is introduced in a serious character, wherein the trailer also introduces other main characters.

Dimple Hayathi looked stunning, wherein there is an intimate lip kiss sequence between Ravi Teja and Meenakshi Chaudhary. The ending portions are much more engaging, as Ravi Teja introduces himself as the one and only king in the game, he’s part of.

The trailer looks promising with all the commercial elements fused in it. Sujit Vaasudev and GK Vishnu’s cinematography is first class, while dialogues by Srikanth Vissa and Sagar are powerful. Rockstar Devi Sri Prasad elevated the sequences with his wonderful BGM. Production design of A Studios is top-notch.

The film is produced by Bollywood production house Pen Studios in association with A Studios. Amar Reddy is the editor of the film.

One of the most patriotic songs that I have heard in...